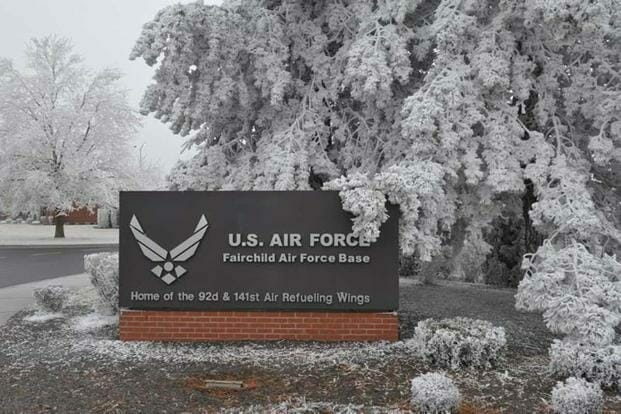 Two noncommissioned officers at Fairchild Air Force Base, including one authorities believe made social media threats about seizing the U.S. Capitol in late 2020, have denied allegations they stole thousands of rounds of ammunition from the West Plains military installation.

John I. Sanger, 30, and Eric A. Eagleton, 29, are both named in an 11-page criminal complaint unsealed Tuesday in federal court in Spokane . They are identified in the documents as staff sergeants in the Air Force, a rank between senior airman and technical sergeant. An FBI agent with the Inland Northwest Joint Terrorism Task Force, working with the Air Force’s Office of Special Investigations, accused both men of taking the ammunition for personal use at a shooting range near Fishtrap Lake at least twice in March.

Authorities tied Sanger to two social media accounts making antigovernment statements in the months between the 2020 presidential election and the storming of the U.S. Capitol on Jan. 6, 2021, according to court documents. He appeared in a federal courtroom Wednesday afternoon following his arrest Tuesday, where a denial of the charges was entered on his behalf by U.S. Magistrate Judge James Goeke.

The government alleges that in a comment posted Dec. 2, 2020, one of the accounts linked to Sanger said in response to a question about what “taking our government back” looked like, “I think the capital needs to be seized … No trial or chance to escape,” according to court records.

Four days later, the same account wrote, “They defrauded our election system and are getting away with it. That means this system has run it’s course. People have to die,” according to a sworn statement from FBI Special Agent David M. White.

No mention of the online comments was made in court Wednesday. Goeke appointed a public defense lawyer to represent Sanger, and set a hearing for Thursday to determine if he should remain in jail. Prosecutors indicated they’d file a formal indictment against Sanger and Eagleton in the coming days, and had executed a search warrant in connection with his arrest.

Eagleton appeared in court Tuesday, where Goeke also entered a denial of the allegations against him . His detention hearing is scheduled for Monday.

A spokeswoman at Fairchild said the base is aware of the arrest of base personnel and was “working closely” with federal authorities on their investigation. She directed further questions to the branch’s Office of Special Investigations.

An email message to the office seeking comment on the sergeants’ current status was not immediately returned Wednesday.

The terrorism task force had been investigating Sanger after linking him with the social media accounts, according to court documents.

An undercover agent working with the Air Force’s Office of Special Investigations began chatting with Sanger, who “told the (agent) he is actively recruiting in hopes of forming a local cell of like-minded individuals.”

Last month, the undercover agent and Sanger met Eagleton at a truck stop before going target-shooting. The agent was wearing a recording device, and Eagleton told the agent that members of the base’s Combat Arms Training Management section routinely stole ammunition, “up to 3,000 rounds in a day,” and distributing them among members of the training section. The undercover agent was also shown a suppressor that lacked a serial number.

During the meeting, Eagleton also discussed “his anti-Semitic views and dislike for Jews,” according to the sworn affidavit.

Air Force Office of Special Investigations agents observed the men shooting ammunition taken from cans that appeared similar to those used for combat arms training. The packaging contained numbers that a check of base records showed had been expended on-base in training exercises months earlier, according to the affidavit.

Both men face charges of conspiracy to commit theft of government property and possession of stolen ammunition. The felony offense can carry up to a 5-year prison sentence.

In a statement, U.S. Attorney for Eastern Washington Vanessa Waldref commended FBI and Air Force investigators for working together to build the case.

“So many of those who serve at Fairchild Air Force Base are career public servants who sacrifice their time, energy, and even their lives to keep America safe,” Waldref said. “When individuals put their own interests ahead of others and abuse the public trust, those individuals dishonor the countless public servants who dedicate their lives to government and military service.”

© Copyright 2022 The Spokesman-Review. All rights reserved. This material may not be published, broadcast, rewritten or redistributed.