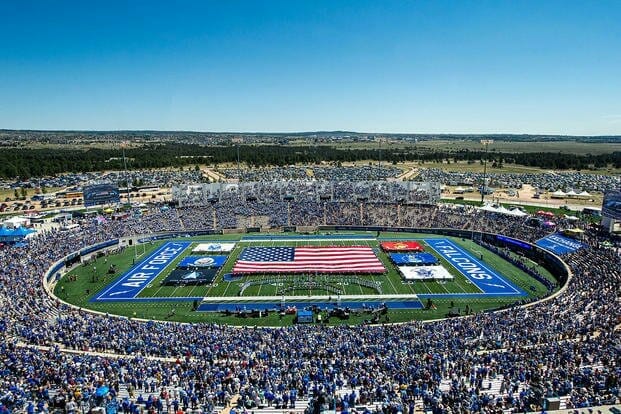 Over 7,500 graduates, parents, families, foundations and corporations contributed funds through the Air Force Academy Foundation, bolstering the total investment in the Defining Our Future campaign to $248.26 million.

Defining Our Future campaigns for private funding to support and develop academy programs in academics, military and athletics. The campaign is on track to surpass its $270 million fundraising goal, said Kelly Banet, senior vice president for development.

“The campaign creates opportunities for graduates, parents and families, and supporters to help advance USAFA’s excellence,” said Mark Hille, Class of 1997 and president of the Association of Graduates and the foundation. “It’s a way graduates and friends can feel vitally connected to the mission — to know they are supporting USAFA cadets in developing into the leaders of character our Air Force and Space Force require.”

The $51.7 million received in 2022 is going toward initiatives in areas including academics, warfighting training, athletics, character development and heritage.

Over 2,600 donors contributed over $1.3 million on the 1Day1USAFA day of giving on Aug. 3. This first-ever giving day was a chance for supporters to make donations to the missions of USAFA, USAFA Preparatory School and the Air Force Academy Fund for community support and Academy projects.

The recruiting initiatives of the Academy Scholars Program were elevated in 2022 with a $10 million donation from John Martinson, Class of 1970. Since renamed the Martinson Honors Program, it has created opportunities for cadets and increased program visibility.

The Institute for Future Conflict received a $1 million donation toward conflict research from John Fox, Class of 1963. The gift has brought in a fellow to “focus on future pacing threats,” according to a release, supporting future conflict research.

USAFA also opened the Outdoor Leadership Complex as part of the Center for Character and Leadership Development thanks in part to support from the class of 1963. “The state-of-the-art complex provides cadets with hands-on, team-oriented opportunities to develop leadership skills they will need as Air Force and Space Force officers,” the release said.

The new Madera Cyber Innovation Center is now under construction and expected to open in fall 2024 after exceeding its $30 million fundraising goal. According to an article from the Air Force Academy, the center will be 33,000 square feet and house cyber-tech classrooms, labs, research and design spaces.

The Hosmer Visitor Center is also under construction at the academy’s north gate entrance, and a $5.5 million donation from Jerry Bruni, of the Class of 1970, and Pam Bruni is going toward immersive exhibits and displays inside. The visitor center is expected to open in 2025, said Steve Lincoln, director of foundation and campaign communications.

The HH-3E Jolly Green Giant static display honoring heroic search and rescue crews was dedicated in fall 2022, thanks to contributions from Max James, of the Class of 1964, the Class of 1981 and additional donors.

USAFA athletics are also getting support from donated funding. A $2.5 million donation from the Erdle family in honor of Brig. Gen. Philip J. Erdle (Ret.) will transform the spectator experience at Falcon Field for baseball fans.

The Falcon Stadium will also be modernized in phases, supported by a $1 million Mary K. Chapman Foundation grant and a $500,000 El Pomar Foundation grant. The first phase of this process is expected to include updates to the east fan stands with a new entrance, a club-level indoor seating area, an event space and new premium seating, Lincoln said.

Despite fundraising efforts, there are continued financial needs, Banet said. One top priority is raising an additional $15 million for the Falcon Stadium modernization.

“We’re excited by the strong interest in supporting the project. It’s a key investment not only in Air Force athletics and enhancing the fan experience, but also in boosting the stadium as the academy’s front door for the community — all working to support the USAFA mission,” Banet said.

Additional strategic priorities include the continued development of the academy’s Institute for Future Conflict, the planned static display at Davis Airfield in memory of the Tuskegee Airmen, the Hosmer Visitor Center and the Madera Cyber Innovation Center and boosting participation through expanded class and annual giving, Banet said.

© Copyright 2023 The Gazette (Colorado Springs, Colo.). All rights reserved. This material may not be published, broadcast, rewritten or redistributed.