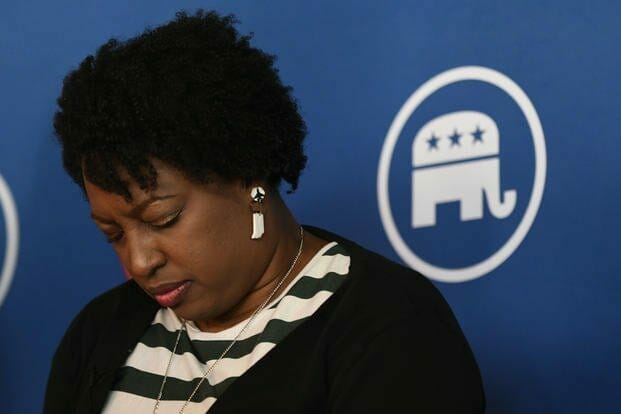 A “junior individual” improperly released a Republican congressional candidate’s Air Force records, an action that led to the public disclosure of her sexual assault, the service is acknowledging.

“Based on the preliminary findings of an investigation, it appears information was released to a third party by a junior individual who didn’t follow proper procedures and obtain required consent,” Air Force spokesperson Ann Stefanek said in a statement.

“The Department of the Air Force takes its responsibility to safeguard private information seriously and the matter remains under investigation,” Stefanek added.

At issue is a report in news outlet Politico on Jennifer-Ruth Green, a lieutenant colonel in the Indiana Air National Guard who is locked in a competitive race for a House seat in Indiana against Democratic Rep. Frank Mrvan. A Republican has not held the seat in nearly a century, but election forecaster Cook Political Report rates it as “Democrat toss up” this election.

As part of a lengthy profile of Green, Politico reported earlier this month that she received a poor performance review while in the active-duty Air Force in 2010 that said she did not meet leadership, professionalism and judgment standards.

The review cited two incidents, one where she loaded her weapon inside a military facility and another where she walked away from the rest of her group while visiting a facility in Iraq, according to Politico. During the Iraq incident, she alleges she was sexually assaulted by an Iraqi serviceman grabbing her breast and exposing himself.

Green has maintained the evaluation was retaliation for her reporting the assault after a superior told her not to, and accused Mrvan or his supporters of “illegally obtain[ing] my military records describing my sexual assault” and leaking the records to smear her. Mrvan has denied that he or anyone affiliated with the campaign gave the records to Politico.

Politico said in the article the records were obtained through a public records request and given to the publication by someone outside Mrvan’s campaign.

In an interview on Fox News after the article was published, Green said her campaign asked Politico not to report on the service records because they told only “half of a story” and that, in order to tell the full story, she would need to publicly discuss the assault for the first time.

“This was something that was forcing me to discuss my history and tell my story about sexual assault on a national stage,” she said.

By law, only limited information about a service member’s record is releasable to the general public through a Freedom of Information Act request if the record is newer than 62 years old and the service member has not given their permission for personal information to be released, according to the National Archives’ National Personnel Records Center. Examples of what can be released include name, dates of service, final rank and awards they received. More detailed information, such as performance reviews and non-criminal punishments, are supposed to be shielded from release under the Privacy Act.

The Air Force statement acknowledging Green’s records were improperly released comes after a pair of Republican congressmen said the service had told them it identified the “leaker” and promised the person “will be held accountable.”

After their statement, Green said in her own statement that she “appreciate[s] that we now have confirmation, as I have contended all along, that my records were not properly obtained through FOIA.”

Related: Meet the Vets Running for Congress, the Largest Group of Candidates Who Served in a Decade