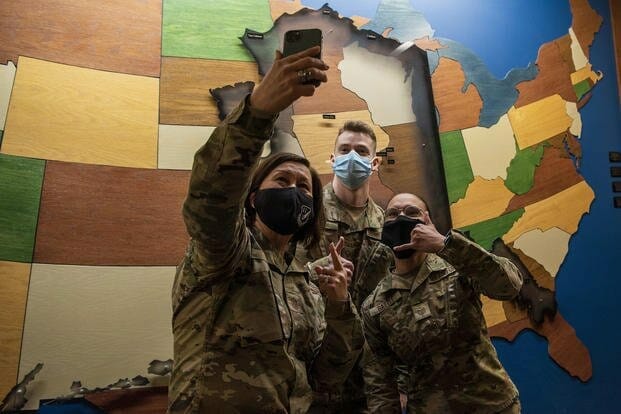 An Air Force veteran who was tired of having his pointed Facebook comments deleted on the service’s senior enlisted leader’s official page took the noncommissioned officer to court over being blocked online and won.

Richard Lee Rynearson III, a retired Air Force major, filed a lawsuit in August 2021 with the Center for Individual Rights — a nonprofit legal firm based in Washington, D.C. — and reached a settlement last week with the Air Force, changing the service’s social media policy.

Chief Master Sergeant of the Air Force JoAnne Bass’ official Facebook page now has a new disclaimer: “Posts will not be removed, and users will not be banned, based on the viewpoint expressed in any comments.”

Read Next: Space Force’s Wearable Fitness Tech Plan May Have Punitive Consequences After All

The lawsuit sets a new precedent for the military’s official social media accounts and serves as yet another example of the complications the Air Force faces with developing policies to determine what is considered unacceptable behavior online for officials and the public.

Rynearson’s lawsuit stems from a Nov. 22, 2020, incident, when Bass’ page posted a message around Thanksgiving that said, “… there’s not a day that goes by that I’m not thankful for each of YOU. The people, Airmen and families, that make up the strongest Air Force in the world.”

Rynearson began lamenting that the Air Force was too focused on making sure “nobody is offended or feels like a victim.”

He also responded with an image of a Care Bears cartoon with the phrase, “I am thankful the phrase ‘air power’ has now been replaced with #CarePower.”

Rynearson was blocked shortly after he posted his comments. His lawsuit from the Center for Individual Rights followed a year later.

Rynearson is a decorated veteran and received the Distinguished Flying Cross with Combat “V” for a 2003 mission in which he served as the co-pilot of an AC-130U while supporting special operations forces, according to the award citation.

After leaving the service, Rynearson has engaged in legal battles with the U.S. Border Patrol and Washington State regarding free speech and individual rights.

As part of the Aug. 3 settlement, Rynearson’s access to the chief master sergeant’s Facebook page was reinstated.

“Though the government is free to use big-tech platforms, it is not free to adopt big-tech’s policy of silencing speech that it finds objectionable,” the Center for Individual Rights said in a press release. “It is more important than ever to ensure that social media remains a place of free and open debate regardless of political viewpoint.”

While the new language on Bass’ Facebook page says comments won’t be removed because of the opinions they voice, it does allow removal of posts “that contain obscenity, epithets, or threats, advocate or incite violence or other criminal conduct, or constitute harassment or cyberstalking.”

The Air Force’s official social media policy and guidelines, which were shared by a service spokesperson, do not show the amended comment language yet.

“The CMSAF Facebook page comment policy has been revised and the details are posted on the CMSAF Facebook page,” the service said in a statement to Military.com. “Air Force leaders are committed to engaging in online forums to aid the understanding, trust and support of the U.S. population, allies and partners while also acting to deter, dissuade and otherwise influence adversaries.”

The service did not respond to a question asking whether it believes the new policy will embolden social media trolls.

Late last year, the Department of Defense issued updated guidance on social media in an effort to weed out extremist views from the ranks. That policy articulated that service members who have been found posting, liking or sharing materials that are associated with extremist views could be punished by their commanders.

Previous Pentagon guidance prohibited service members from being members of extremist groups, but did not tackle the issue of advocating those views online. However, the line between acceptable opinions and extremist viewpoints posted online still hasn’t been clearly defined by service leaders.

Maj. Holly Giroux, an Air Force intelligence officer, published an academic article about social media use in the military for Air University at Maxwell Air Force Base, Alabama, in late 2021.

In her research, Giroux noted that since “social media is integral to everyday life and it is unrealistic to forbid its usage, more training and education is needed amongst the officer corps regarding the gravity of partisan rhetoric on the various platforms.”

But she added that guidance and policies from the services are often unclear.

“While the DOD and each individual service have released additional guidance regarding social media usage … it is subjective and not always clear what consequences will come from violating social media guidelines,” Giroux wrote.

Bass’ legal battle is the latest high-profile case in which a public official’s social media censorship has been scrutinized by the courts.

In 2019, a federal court in New York ruled that then-President Donald Trump’s frequent blocking of critics on Twitter violated the First Amendment.