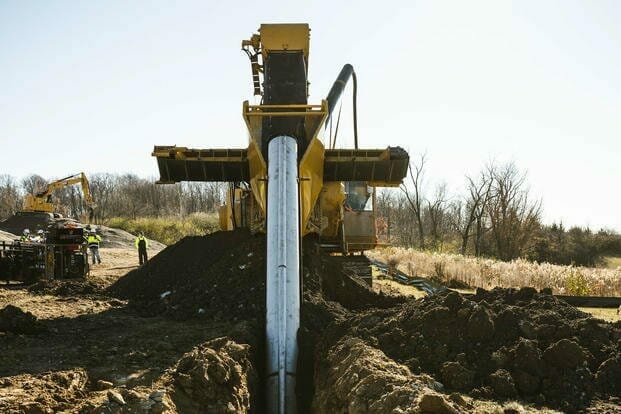 In an effort to stop PFAS contamination before it reaches the Dayton water system, Wright-Patterson Air Force Base said engineers have built a 420-foot-long trench near a hazardous materials storage site on the base.

“The constructed trench will intercept impacted groundwater, and a downgradient-collection basin will catch affected surface water so it can be treated before it’s discharged near the Dayton drinking water wellfield,” the base said Thursday.

“We are very supportive of taking early actions like this that Wright-Patterson Air Force Base is doing,” Bonnie Buthker, chief of the Ohio Environmental Protection Agency’s Southwest District office, said in a statement on the project. “By installing this trench and collecting the contaminated groundwater and the rainwater from this particular site, they’re preventing that contamination from impacting Dayton’s production wells and also base production wells.”

The city of Dayton sued the Wright-Patterson and the Department of Defense in May 2021 for (the lawsuit alleges) failing to stop contaminants from entering a source of the city’s drinking water.

The lawsuit, first filed in Dayton’s federal court, accuses the base of failing to stop per-and polyfluoroalkyl substances, known as “PFAS,” from entering a city water source.

The suit was moved to a federal court in South Carolina later that summer, where the case remains pending.

More recently, twenty-one wells at the base were found to have yielded water samples showing the presence of “forever chemicals” above EPA lifetime health advisory levels or regional screening levels, according to data the base released late last year.

The base said the storage facility “accidently released a firefighting agent called aqueous film-forming foam (AFFF) containing per- and polyfluoroalkyl substances (PFAS) on two occasions in 2008 and 2011.”

Officials said the fire-suppression system at this facility used an earlier version of the firefighting foam before the EPA identified PFAS as risky.

“The released (firefighting foam) soaked into the soil and entered the ground and surface water near the site,” the base said.

Last week, the Department of Defense released new requirements for firefighting foam used at military bases. “It marks a crucial step toward ending the use of foams containing the toxic ‘forever chemicals’ known as PFAS, which have long contaminated drinking water,” the Environmental Working Group said in a statement.

Questions about the release and the trench were sent Friday to a representative of the 88th Air Base Wing, the host unit that oversees Wright-Patterson, one of the nation’s largest Air Force bases and the largest single-site employer in Ohio. Questions were also sent to a city of Dayton spokeswoman.

The 2-foot-wide trench extends about 30 feet below the surface, reaching bedrock, the base said, citing Ed Coggin, technical director of the water engineering group at Weston Solutions LLC, the contractor awarded the project in 2021 as part of the U.S. Army Corps of Engineers’ Rapid Response Program.

As groundwater seeps out the trench’s sides, gravity will pull it through the gravel fill material and into a pipe, preventing groundwater from moving further from the site.

Then a collection pipe is supposed to convey water to a submerged pump to send 15 to 25 gallons of water per minute to the downgradient-treatment system, which will use an organically-engineered clay to filter out PFAS.

“The intercepted groundwater will be combined with captured surface water from the drainages south and west of the storage facility,” said Greg Plamondon, base remedial project manager for the site. “All accumulated water will then be treated by a series of passive pretreatment and primary treatment beds before being discharged to the base stormwater network. This system will effectively reduce the concentrations of PFAS leaving the base.”

© Copyright 2023 Dayton Daily News. All rights reserved. This material may not be published, broadcast, rewritten or redistributed.