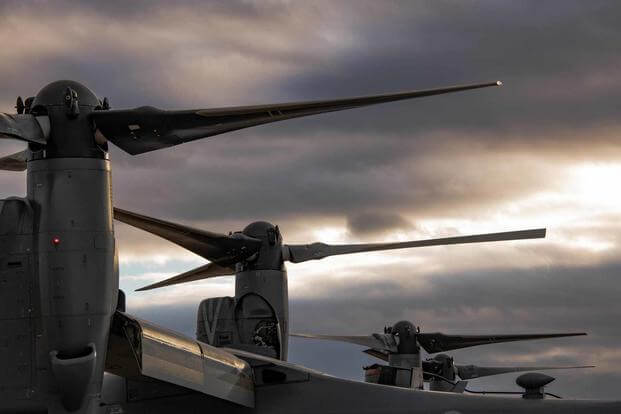 The Air Force’s fleet of CV-22 Ospreys is back in the air again, two weeks after it was grounded over ongoing safety concerns and with no immediate fix in sight for a long-standing mechanical issue facing the aircraft.

Lt. Gen. Jim Slife, head of Air Force Special Operations Command, said the Ospreys were cleared to fly again on Friday, according to a press release. The service is focusing on teaching pilots how to address the issue, which was identified as “hard clutch engagement,” or HCE, which could lead to issues in flight.

“Until a root cause is identified, and solution implemented, the focus is on mitigating operations in flight regimes where HCEs are more prevalent and ensuring our aircrews are trained as best as possible to handle HCEs when they do occur,” Lt. Col. Rebecca Heyse, a spokeswoman for Air Force Special Operations Command, said in an emailed statement.

When Air Force Special Operations Command, or AFSOC, grounded its Ospreys on Aug. 16, it cited four incidents with hard clutch engagement since 2017.

An AFSOC official previously told Military.com that the issue “causes the engine [system] to transfer all the power into one of the [two] engines to keep the Osprey in the air.”

“When the pilot grabs the throttle of the Osprey, the imbalance is creating too much torque on the aircraft,” the official added.

But the Marine Corps, which also flies the Osprey, announced just days after the Air Force’s stand-down that it was not grounding its fleet.

A Marine Corps official who spoke with reporters on the condition of anonymity explained that only 15 mishaps involving the “hard clutch issue” have occurred in the military since the start of the program in 1991, with 10 involving Marine Corps aircraft.

The Marine Corps said its pilots have been trained to respond to hard clutch issues when they appear.

“It is common knowledge with the fleet,” it added. “Simply by doing hover checks significantly reduces the exposure to this incident.”

Since the Aug 16 stand-down, Air Force Special Operations Command’s V-22 crews have participated in briefings to better understand and know how to handle HCE incidents, according to Heyse.

Additionally, AFSOC’s CV-22 maintainers are “completing one-time inspections to verify data within the Air Force maintenance information system and compare it to the components that are physically installed on aircraft,” Heyse added.

AFSOC is continuing to review data and is considering replacing drivetrain components after its Ospreys reach specific flight hour milestones.

But, ultimately, AFSOC’s long-term goal “remains identifying the root cause of HCE and finding and implementing a materiel solution.”

The Osprey is a revolutionary, yet controversial, aircraft for the military. It combines the vertical takeoff and landing capabilities of a traditional helicopter with the long range of a turboprop plane.

News of the stand-down follows two fatal Osprey crashes this year that left a total of nine Marines dead, although the clutch was not implicated in either incident.

This past June, when five Marines onboard an MV-22B Osprey were killed when the aircraft crashed near Glamis, California.

In March, an Osprey crashed near Bodo, Norway, while participating in a military exercise, killing four Marines. That aircraft was based out of Marine Corps Air Station New River in North Carolina.

Investigators concluded that the pilots for the aircraft that crashed in Norway turned too sharply, causing the craft to lose altitude and speed and, ultimately, crash.

Those crashes were the first deadly incidents with the aircraft since 2017. Between 1991 and 2006, while the aircraft was undergoing testing, there were four crashes resulting in 30 deaths.

— Konstantin Toropin contributed to this report.