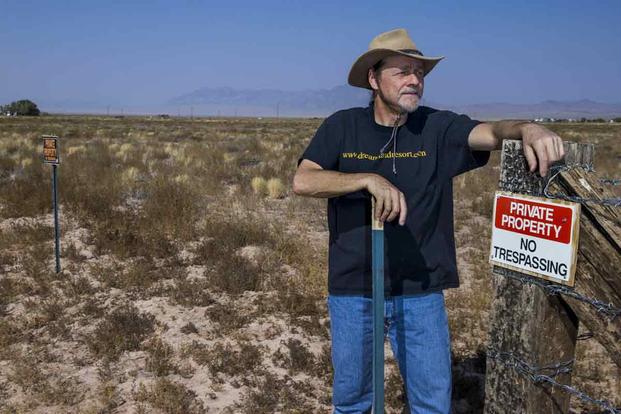 Agents from the U.S. Air Force and FBI recently raided homes in Clark and Lincoln counties in an investigation of a man who operates a website about the top-secret military base known as Area 51, a spokesman said Wednesday.

The Air Force Office of Special Investigations and FBI entered homes owned by Joerg Arnu in Las Vegas and the tiny town of Rachel on Nov. 3 and seized potential evidence for an undisclosed joint agency probe, according to Lt. Col. Bryon McGarry, spokesman for Nellis Air Force Base in Las Vegas.

“This is an open and ongoing law enforcement investigation between the Las Vegas FBI and Air Force OSI,” McGarry said in a statement.

He declined to elaborate on the basis for the investigation, but Arnu, of Las Vegas, is the webmaster of a site titled Dreamland Resort, focusing on Area 51, an Air Force base in Lincoln County about 120 miles northwest of Las Vegas where testing is conducted on new and classified U.S. military aircraft.

Dreamland Resort, at dreamlandresort.com, started by Arnu in 1999, features YouTube videos taken from drones flown over places around Area 51, satellite images of the base, a discussion forum with posts on the topic, articles on test flights, “black projects” and UFOs, and what it says are photos of new vehicles such as the so-called “super secret” Northrop Grumman RQ-180 unmanned stealth aircraft shown flying in 2021.

Arnu, reached by email Wednesday, declined comment until he can speak to his attorney. But he forwarded a news release posted on his web page last week telling his side of the story.

“I believe the search, executed with completely unnecessary force by overzealous government agents was meant as a message to silence the Area 51 research community,” he said.

Arnu said both his homes were raided “without warning” on Nov. 3 “by 15-20 agents in full riot gear.” The agents broke open the doors while Arnu was in the Rachel home and his girlfriend at the Las Vegas one, and then they “were detained and treated in the most disrespectful way.”

“My girlfriend was led out into the street barefoot and only in her underwear in full view of the neighbors,” he said. “I was led outside, handcuffed and only in a t-shirt and sweats in sub-freezing temperatures.”

After asking the agents why they came, “I was only told that the search was related to images posted on my Area 15 website.”

During the raid, he claimed that all of his “laptops, phones, backup drives, camera gear and my drone were seized,” which meant he lost medical, tax and financial records, personal contacts and photos. He estimated the damage cost to his home at $5,000 and the value of the confiscated equipment at $20,000.

“Even my phone was taken, leaving me in Rachel with two broken doors and no way to communicate or call for help,” he said.

Arnu claims the warrant for the search had 40 pages missing and the case file was sealed, preventing him from reading about it. The FBI had not returned his phone calls, he added.

“At this point I have no choice but to take legal action to try and get my equipment back and to seek reimbursement for the damage,” he said.

Sandy Breault, an FBI spokeswoman, stated in an email that the agency “declines to comment.”

To try to “defuse the situation,” Arnu said he decided to take down some of the material on his site “although I believe that it was legally obtained and legal to publish. I’m not sharing anything on my website that cannot be found on dozens of other websites and news outlet publications.”

He said he would not be removing anything further unless ordered to do so by a federal judge.

© Copyright 2022 Las Vegas Review-Journal. All rights reserved. This material may not be published, broadcast, rewritten or redistributed.