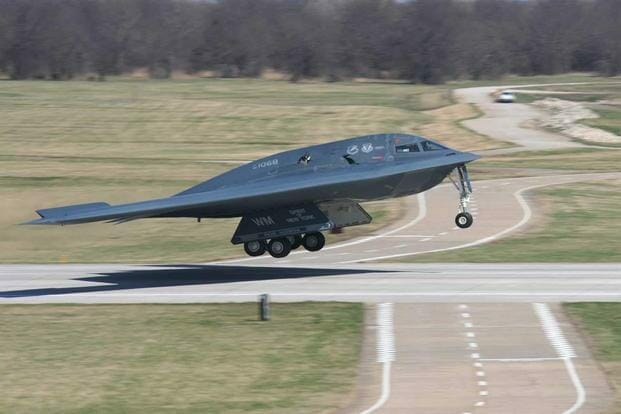 A B-2 Spirit stealth bomber that caught fire during an emergency landing earlier this month has finally been cleared from the runway of Whiteman Air Force Base, Missouri, as the service continues an ongoing safety investigation into the aircraft.

On Dec. 10, “a U.S. Air Force B-2 Spirit experienced an in-flight malfunction during routine operations” and subsequently “there was a fire associated with the aircraft after landing,” Master Sgt. Beth Del Vecchio, a spokesman for Whiteman’s 509th Bomb Wing, told Military.com earlier this month.

The base issued a statement Wednesday, 11 days later, that “the Whiteman Air Force Base runway reopened Dec. 21 for A-10 Thunderbolt II and T-38 Talon flying operations to resume.”

This week, the Air Force announced it was grounding the entire B-2 bomber fleet following the incident. In total, there are only 20 B-2 bombers, meaning putting them out of commission can cause a notable impact to missions.

Whiteman Air Force Base said in a statement Wednesday that Air Force Global Strike Command ordered the stand-down “in order for a safety investigation to be conducted on the aircraft.”

Additionally, the B-2 bomber makes up part of the U.S. military’s nuclear triad, meant to deter potential nuclear strikes from adversaries. The grounding of the B-2s comes as Russia continues to hint at a willingness to use nuclear weapons in its failing war in Ukraine.

Brig. Gen. Patrick S. Ryder, the Department of Defense press secretary, told reporters at the Pentagon on Tuesday that other aircraft in the Air Force’s portfolio can also carry out the nuclear mission.

“The Department of Defense, to include the Air Force, has a variety of capabilities at its disposal, particularly when it comes to our strategic bomber fleet,” Ryder said. “As you know, we also have the B-53, which is both conventional and nuclear capable, which provides a redundant capability broadly speaking when it comes to our strategic forces. I know that our maintainers work hard to ensure that those aircraft are available and off the ground as soon as they can.”

Whiteman Air Force Base also said in an emailed statement on Wednesday that the B-2 fleet “can be flown if directed by the commander in chief to fulfill mission requirements.”

The B-2 Bomber was scheduled to be flown during the 2023 Rose Bowl Parade and Game on Jan. 2 in Pasadena, Calif., but will be replaced by B-1B Lancers flown out of Ellsworth Air Force Base in South Dakota.

“Our number one concern is the safety and security of our personnel and fleet. We deeply regret having to make this decision so close to the event, but we are committed to returning to Pasadena in 2024,” Col. Daniel Diehl, 509th Bomb Wing commander, said in a press release.

The last major mishap with a B-2 was more than a year ago in September 2021, when a stealth bomber rolled off the runway at Whiteman. There were no injuries, and unlike this month’s incident, the bomber didn’t catch fire. A March 17 report from Air Force Global Strike Command provided more details.

That report revealed that the damage estimate to the B-2 was around $10 million. Air Force Col. Robert Cocke, the investigation board president, wrote in the report that the crash likely happened because lock springs on the landing gear failed to provide “sufficient pressure” to maintain a locked position, causing the wheels to buckle under the aircraft.

No error was attributed to the pilot or crew. But the report said that “there is no requirement for routine replacement of the lock link” springs. The last time the bomber went through in-depth inspection was 2014, according to investigators.

Each B-2 bomber costs around $1.1 billion, according to an Air Force fact sheet.

The Air Force unveiled the newest bomber, the B-21 Raider earlier this month, marking the first bomber in the American military’s fleet in more than 30 years.

The Pentagon plans to build 100 B-21s, more than the total number of Air Force B-2s and B-1Bs combined.