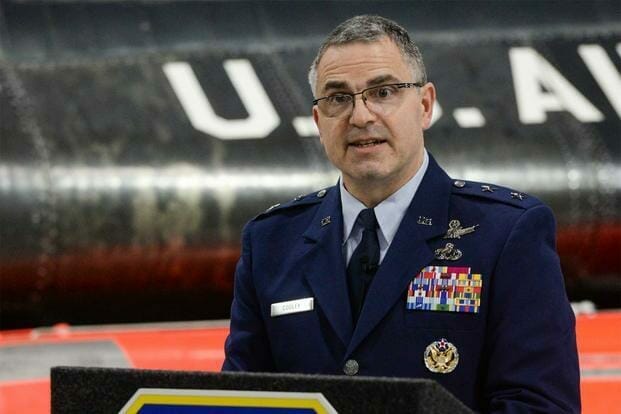 WRIGHT-PATTERSON AIR FORCE BASE, Ohio — Maj. Gen. William Cooley, the first Air Force general to ever face a military trial, was found guilty Saturday of forcibly kissing his sister-in-law during a family barbecue in 2018.

Military judge Col. Christina Jimenez ruled Cooley, the former commander of the Air Force Research Laboratory, was guilty of the count, and he now faces the possibility of seven years confinement, separation and loss of pay and benefits during a sentencing hearing on Monday.

He was found not guilty on two additional counts that included allegations he groped the victim at the get-together. The case was decided by the judge, rather than a jury, at Cooley’s request. The general also declined to testify in his own defense during days of court martial hearings this week that included testimony from the victim and the general’s brother.

The sister-in-law, in a statement read by her lawyer Ryan Guilds as she teared up while standing behind the assembled reporters, expressed hope that the verdict means coming forward “won’t be this difficult for the next survivor.”

“Today marks the first time an Air Force general officer is finally being held accountable for his heinous actions,” she said in the statement.

Invoking the soldier killed at Fort Hood in 2020 after being sexually harassed, the sister-in-law added that “Vanessa Guillen’s spirit has been with me on this journey, and while this process has been incredibly invasive not only for me but also my immediate family and closest friends, I know there are countless other people who have been silenced forever, like Vanessa, so staying silent was simply never an option.”

Cooley’s case marked the first time criminal charges against an Air Force general officer reached a court-martial. The case came as the Pentagon attempts to stamp out sexual assault in the ranks after years of failing efforts, as well as congressional pressure on the military to better combat sexual violence.

Congress recently mandated changes to the military justice system that will give independent prosecutors the decision to prosecute sex crimes rather than commanders, a change lawmakers and advocates hope will result in more prosecutions.

In a written statement after the verdict was handed down, Air Force Materiel Command chief Gen. Arnold Bunch, said the trial demonstrated the service’s “commitment to prevent sexual assault, protect victims and take appropriate action against offenders when it occurs.”

Before Jimenez’s ruling, the prosecution and defense on Friday meticulously laid out their cases in nearly three hours of closing arguments.

In the prosecution’s telling, Cooley — his inhibitions lowered after a night of drinking at a family barbecue and thinking of himself as “so important” he could do whatever he wanted — acted on years of fantasies and tried to force himself on his sister-in-law. She alleges that, during a brief car ride after the party, he tried to yank her hand over his crotch and then, when they were back in her garage, pushed her into the car window, forcibly kissed her, put his hand on her breast and then moved his hand to between her legs.

“Some may ask, why didn’t [she] scream out to her husband when she got out of the car? Why didn’t she scream about what happened? Why didn’t she yell for help?” said Lt. Col. Matthew Neil, who delivered the closing argument for the prosecution. “Hindsight is 20/20. It’s easy to judge her now, but nobody knows how they’re going to react in that situation until they are faced with it.”

Prosecutors pointed to a note Cooley wrote to his sister-in-law and brother, as well as emails he wrote to himself and later deleted, where he appeared to admit what happened.

In the note, Cooley wrote that he “hurt” his brother and sister-in-law for his “own selfish ego” and was “stunned by his own deplorable actions.”

“He also says in that … email, ‘I saw that alone time with [his sister-in-law], albeit short, was an opportunity to expand my conquests with an attractive woman,'” Neil said.

Neil also highlighted testimony from family friends who were at the barbecue, as well as testimony from the sister-in-law’s priest, who said she told them about the incident a couple weeks later and appeared distressed while doing so. The priest’s testimony was particularly important, Neil argued, because it was a one-on-one meeting without her husband present and she “had no reason to go to a member of the clergy and tell him something that’s not true.”

The defense’s case rested largely on a voicemail the sister-in-law left Cooley two days after the alleged incident in which she said her husband “knows we kissed.”

Prosecutors argued that statement says nothing about whether she consented.

“She didn’t ask for it, she didn’t want it, and this voicemail doesn’t say she did,” Neil said. “It was [her] effort to show grace.”

But the defense argued the voicemail proved the only thing that happened in the car was a consensual kiss.

In the defense’s telling, the sister-in-law concocted the allegations of sexual assault because, after her marriage nearly fell apart in 2016 when her husband cheated on her, she was fearful of her husband’s reaction to finding out she and his brother consensually kissed.

The defense also argued the sister-in-law and brother, who is a civilian Air Force employee, were worried about his career and so “gaslit” Cooley into adopting their version of events.

Cooley did not testify in his own defense, and his lawyers called no witnesses to the stand. As court started Friday, Jimenez asked Cooley whether it was his personal decision not to testify, to which he replied, “Yes, your honor.”