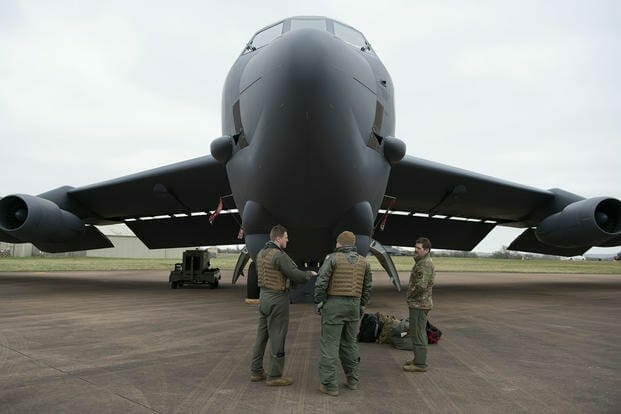 The National Museum of the U.S. Air Force will host a traveling tribute to Vietnam War veterans in coming days — and a B-52 flyover is also on its slate of events.

The museum will host the American Veterans Traveling Tribute Vietnam Memorial — an 80%-sized replica of the Vietnam Wall in Washington, D.C., bearing the names of more than 58,000 service members killed in Southeast Asia. — Aug. 18 to 21.

The museum said it will also host an Aug. 19 B-52 flyover, Air Force Flight One pop-up concerts, historical displays, veteran presentations and more.

Panel 44 is a commemoration of the 40th anniversary of the Vietnam Veterans Memorial containing the names of 337 American service members who died between March 9 to 16, 1968. The panel was originally produced in 1982 to go on display in Washington D.C., but was ultimately not placed because of a crack.

The B-52 Stratofortress flyover is scheduled for 1 p.m. Aug.19. It is weather-dependent.

The mighty B-52 has been in service since 1954. The Air Force describes it as the “backbone of the strategic bomber force for the United States.”

The bomber can drop or launch the widest array of weapons in the U.S. inventory, the Air Force says, including gravity bombs, cluster bombs, precision guided missiles and more.

The Vietnam Memorial will be open daily from 9 a.m. to 5 p.m. Aug. 18 to 21, located outside the museum near the flagpole.

Sept. 18 this year marks the 75th anniversary of the Air Force. A complete schedule of events and exhibits is available at https://www.nationalmuseum.af.mil/Upcoming/Events/75th-anniversary/.

© Copyright 2022 Dayton Daily News. All rights reserved. This material may not be published, broadcast, rewritten or redistributed.