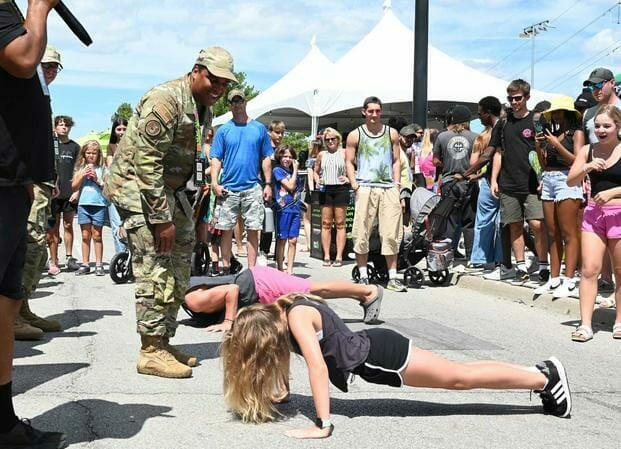 Air Force recruiters are about to be hit with a pay cut even as the service struggles to get new airmen into the ranks and leadership cautions that recruitment may be a long-term problem for the military as a whole.

Air Force Recruiting Service recruiters will lose $75 in special duty pay each month for fiscal year 2023, beginning in October, which would add up to nearly $900 a year in lost wages. Losing the pay could be a blow to recruiters’ morale as they face difficult challenges brought on by the COVID-19 pandemic, economic inflation and a shifting workforce.

Maj. Gen. Ed Thomas, the head of the recruiting command, is promising to push for the extra pay to be reinstated in the next fiscal year. The general “recognizes the unique challenges Air Force recruiters and their families experience and he is working to have the monthly $75 payment restored in the future,” Randy Martin, a spokesman for Air Force Recruiting Service, told Military.com

Special duty pay is often designated for career fields with high degrees of responsibility and skills.

Many recruiters are working long days, as well as nights and weekends to help the Air Force meet its goals. The pay helped cover some of that extra time, and many have to come rely on it, especially as inflation has skyrocketed to nearly 9% over the summer.

The reductions in the pay also come as the Air Force is increasingly counting on the specialized skills of recruiters. It faces strong headwinds as it tries to woo young Americans to enlist. Across the military services there is an ongoing struggle to meet recruiting goals.

Earlier this year, the Air Force announced hefty bonuses — some up to $50,000 — for recruits to join the ranks and quickly ship off to training. Air Force officials cited competitive pay and bonuses being offered to civilians as one of the reasons for the five-figure offers.

The same factors affecting recruiting for the service have also affected the Air Force Academy, which saw a 28% drop in applications for the class of 2026 from the year prior.

To promote the Air Force, Thomas as well as Lt. Col. Dan Rooney — a fighter pilot, author and motivational speaker — did a Fox News interview on Aug. 24 to address the recruiting woes.

“We’re just in a national labor shortage right now,” Thomas said. “It’s a pitched battle for talent, really, across the country … The longer-term challenge though is more of a foundational one for us, and it’s just that less and less people are exposed to the U.S. military and really understand who we are today.”

Additionally, Thomas talked about how not being able to do as many in-person events was a major hindrance to getting recruits to sign up.

“We are going to end up landing on fumes,” Brown said at an event hosted by the American Enterprise Institute. “It’ll drive some challenges as we go into fiscal year 2023 … the workforce is a bit different today than when I got in.”

Brown said that the backlog of airmen who were waiting to start training through the delayed entry program will likely be used up this year. That list of past recruits will help the Air Force reach its recruiting goals for this year, but won’t be able to augment efforts in future years.

Editor’s Note: A previous version of this story misspelled Lt. Col. Dan Rooney’s name. It has been corrected.