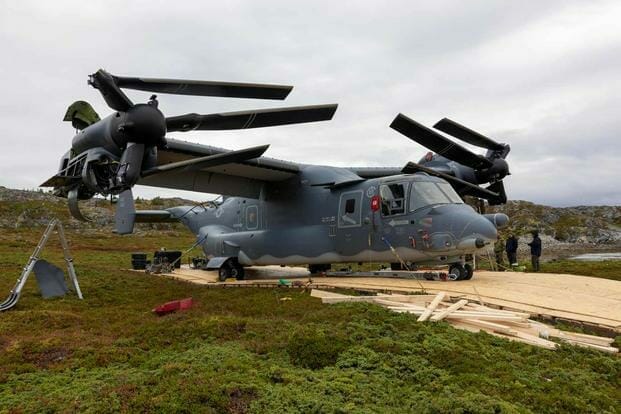 The head of Air Force special operations said he’s concerned about a mechanical issue on the service’s fleet of CV-22 Ospreys that caused sudden emergency landings, saying that the root cause has not been identified.

Lt. Gen. Jim Slife, the commander of Air Force Special Operations Command, told reporters Tuesday evening at the Air Force Association’s Air, Space and Cyber Conference that the service knows that a hard clutch engagement, an issue where power surges into one of the two engines on the aircraft, is happening. But he said experts don’t know why it’s happening.

“I’ve been dissatisfied with the progress that we’re making …,” Slife said. “We may not know why it’s happening, but we do know what is happening.”

In Mid-August, the Air Force Special Operations Command ordered all their Ospreys to stop flying after recording four hard clutch engagements, or HCEs, since 2017. None of those incidents happened in combat environments, and none of them was fatal, according to Slife.

An AFSOC official told Military.com at the time of the stand-down that a hard clutch engagement “causes the engine [system] to transfer all the power into one of the [two] engines to keep the Osprey in the air.”

Slife told reporters Tuesday that he ordered the Ospreys to stop flying last month after realizing the command hasn’t done enough in the past to address the problem.

“I was asking myself, ‘What would I say to myself in the aftermath of a fatal mishap, and we discovered that the reason for this was the clutch issue?'” Slife said. “‘Would I look back and say that I did everything that I could do today?’ I couldn’t answer that in the affirmative.”

While the root cause of the issue is still unidentified, he cleared the fleet two weeks later in early September.

Additionally, AFSOC’s CV-22 maintainers are “completing one-time inspections to verify data within the Air Force maintenance information system and compare it to the components that are physically installed on aircraft,” AFSOC said in a statement.

Slife told reporters Tuesday he plans to “put a time-change requirement on those clutches,” meaning that parts would be swapped out on aircraft at scheduled intervals regardless of whether the platform had experienced problems. He added that most of the incidents have occurred around the middle of their service lifespan.

The Osprey is a revolutionary, yet controversial, aircraft for the military. It combines the vertical takeoff and landing capabilities of a traditional helicopter with the long range of a turboprop plane.

In total, 15 mishaps involving the hard clutch engagement have occurred in the military since the start of the program in 1991; four of them happened with the Air Force, and the remainder have happened with the Marine Corps, which also pilots the Osprey.

Unlike the Air Force, the Marine Corps did not ground the aircraft after identifying the problem. The branch said its pilots have been trained to respond to hard clutch issues when they appear.

“It is common knowledge with the fleet,” the Marine Corps said last month. “Simply by doing hover checks significantly reduces the exposure to this incident.”

Air Force Special Operations started to focus on teaching pilots risk mitigation techniques following the stand-down, but the ultimate goal “remains identifying the root cause of HCE and finding and implementing a materiel solution,” according to a statement released earlier this month.

One of the Air Force’s CV-22 Ospreys has been stuck on a remote nature reserve in Norway since last month after the crew experienced a hard clutch engagement and had to make an emergency landing.

Slife said the aircraft is only 80 meters from the edge of the water. The plan is to bring a barge with a crane on it to retrieve the Osprey and then bring it to an airfield for inspection and repairs.

“It’s nearly done and here in the next handful of days, probably inside the next week, we’ll probably pull it up,” Slife said.

Hard clutch engagements are costly, and potentially life-threatening, mishaps. One pilot who spoke with Military.com on condition of anonymity earlier this month detailed a 2017 Osprey incident that caused more than $5 million in damage to the aircraft. Both engines and five gearboxes needed to be replaced, as well as nearly a dozen other components. It took a team of six, working 12-hour days, 45 days to repair the aircraft, according to an Air Force report.