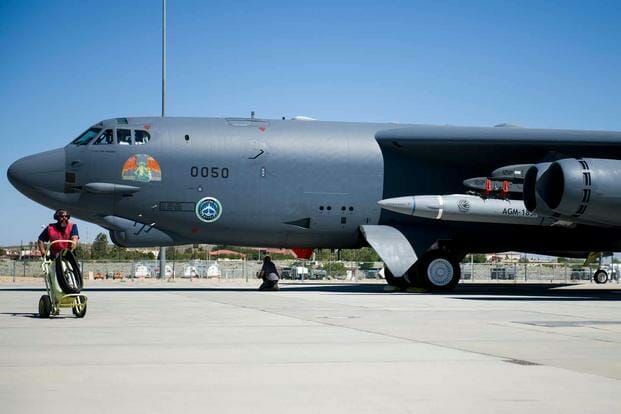 The Air Force announced Monday it has successfully tested a hypersonic missile off the California coast, marking the latest development in the U.S.’ race to catch up to Russia and China in fielding its own weapon on the battlefield.

A B-52 Stratofortress bomber out of Edwards Air Force Base released an Air-launched Rapid Response Weapon — otherwise known as an ARRW — on Saturday, and the missile reached sound-shattering speed.

Hypersonic missiles’ high speeds make them harder to track, trace and destroy before hitting a target, inspiring worry for years among U.S. officials and defense industry experts as some assess that adversaries like China and Russia have outpaced America in developing the weapons.

News of the Air Force’s hypersonic missile test follows weeks of scrutiny by Washington lawmakers, who have raised the alarm amid Russia’s continued use of the fast-moving projectiles during its invasion of Ukraine.

Prior to Saturday, the service had three unsuccessful hypersonic missile launches. Just one day before the most recent test, Air Force Secretary Frank Kendall stoked doubt about developing such a weapon.

“The program has not been successful in research and development so far,” Kendall told the House Appropriations Subcommittee on Defense on May 13. “We want to see proof of success before we make the decision about commitment to production, so we’re going to wait and see.”

Jeffrey Lewis, a professor at the Middlebury Institute for International Studies who specializes in nonproliferation and arms control issues, told Military.com that research on this emerging technology is important but is likely motivated by political concerns from lawmakers worried about competition.

“The political pressure I think is real,” Lewis said. “If China or Russia tests a capability, there’s just enormous pressure in the United States to demonstrate the same capability even if it isn’t applicable to what we want to do.”

In March, Russia’s defense ministry claimed its military used hypersonic missiles against an underground ammunition warehouse as well as a fuel depot during the country’s fighting in Ukraine. It was the first time a country had used such a weapon in combat.

Military officials at the time downplayed the threat. Defense Secretary Lloyd Austin told CBS News’ “Face the Nation” that reported use of a hypersonic missile by Russian President Vladimir Putin’s military was likely a distraction tactic to grow fear in the international community.

“I would not see it as a game changer,” Austin told CBS. “I think the reason he is resorting to using these types of weapons is because he is trying to reestablish some momentum. And again, we’ve seen him attack towns and cities and civilians outright, [and] we expect to see that continue.”

Since then, a senior U.S. defense official told reporters that Russia has used about 10 to 12 hypersonic weapons thus far in its campaign in Ukraine.

More recently, Joint Chiefs of Staff Chairman Gen. Mark Milley told lawmakers during a House Appropriations defense subcommittee hearing May 11 that Russia’s use of the weapons was not “really significant.”

Last year, military officials confirmed China had a successful hypersonic launch that had circumnavigated the globe.

“It went around the world, dropped off a hypersonic glide vehicle that glided all the way back to China, that impacted a target in China,” Air Force Gen. John Hyten, the outgoing vice chairman of the Joint Chiefs of Staff, told CBS News in November.

Saturday’s launch in California makes history as the U.S.’ first air-launched hypersonic weapon, according to the Air Force.

“This was a major accomplishment by the ARRW team, for the weapons enterprise, and our Air Force,” Brig. Gen. Heath Collins, Air Force Program Executive Officer for Weapons, said in a press release. “We are ready to build on what we’ve learned and continue moving hypersonics forward.”

But it’s not clear from the Air Force’s press release how successful the weapons test was. The ARRW, developed by Lockheed Martin, uses a rocket booster to glide the missile toward an area at breakneck speed before a glider separates to hit a target.

Hypersonic missiles — some of which have nuclear-carrying capabilities and can be fired from very far distances at sound-shattering speed — has nearly the same effect on a ground target as conventional bombs, making the use of the prohibitively expensive weapons surprising.

But that hasn’t stopped the U.S. from prioritizing research and development into the new class of weapons. In 2022, lawmakers approved $509 million for hypersonics. That number has grown to $577 million in the 2023 budget proposal.

With a hefty price tag for creating, testing and eventually fielding those missiles, Lewis said they likely won’t be used by the Air Force in battle anytime soon.

“This is a pretty exotic capability that’s at the very beginning of development, which we may or may not ever find useful,” Lewis said. “I suspect this will always be a niche capability, in part because it’ll probably be pretty expensive.”