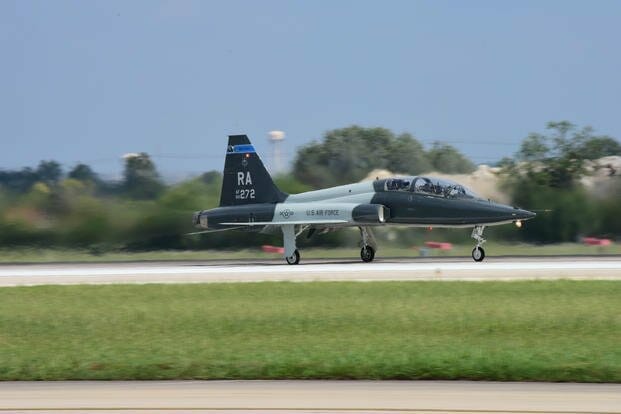 An instructor pilot from Columbus Air Force Base in Mississippi had to eject from his T-38C Talon training jet Monday afternoon after a mishap occurred causing it to crash shortly after takeoff.

The jet crashed around 1 p.m. local time at a private property about 30 minutes south of the base. The instructor was taken to a nearby hospital and there were no fatalities, according to a press release.

“We had a T-38C flying with the 49th Fighter Training Squadron that was rendered inoperable and unrecoverable upon initial takeoff,” Col. Jeremy Bergin, Columbus Air Force Base vice wing commander, told reporters during a press conference late Monday evening.

Read Next: US Air Force Says Penis-Shaped Flight Path Pointed at Russian Base Is a Coincidence

Two T-38Cs took off Monday, each with one person, an instructor, aboard. They were flying in a formation when one of the jets experienced the malfunction. The pilot was “highly experienced and capable,” Bergin said, and praised the airman for his quick thinking during the incident.

Shortly after the jet crashed, base security and the local sheriff’s department rushed to the scene. Bergin also recognized civilians in the area for helping the pilot get to the hospital.

“There were actually some bystanders in the field or nearby the field that helped get that member to the ambulance,” Bergin said. “We’re exceptionally grateful for our community here.”

An investigation into the crash is ongoing. When asked whether anything could be done to prevent future accidents, Bergin said he’d need to see what officials determined to be the root problem first.

“Every investigation is going to find items worthy of future consideration, and we won’t know what those items are until after the investigation,” Bergin said. He later added “if there is something that requires us to change our procedures, we will.”

Monday’s crash is not the first incident involving a T-38 out of Columbus Air Force Base.

Last year, on Feb. 19, two pilots in a T-38 from the base died during a training mission outside of Montgomery, Alabama, as the jet was making its way to Florida.

Killed in the crash was Scot Ames Jr., an instructor pilot with the 50th Flying Training Squadron, as well as a student pilot who was a member of the Japanese Air Self Defense Force.

In May 2018, two pilots ejected from their T-38 near the base, and the plane crashed in a remote part of northeast Mississippi. In August the same year, the base halted flight operations for 24 hours after a T-38 ejection seat inadvertently fired while the plane was undergoing inspection.

The Air Force has been flying the T-38 since the 1960s. The two-seat, supersonic jet trainer is still used by the service, as well as the Navy and NASA, to instruct pilots.

Since 1960, there have been 211 Class A mishaps — the term used by the military to describe the deadliest or costliest crashes, according to Air Force Safety Center data. There have been a total of 86 pilot deaths and 149 fatalities in total from the T-38 in its 62-year history.

The service has been planning for several years to phase out the T-38 Talon.

In September 2018, the service gave Boeing Co. a $9.2 billion contract to build a replacement aircraft, with a working name of T-X. In 2019, the Air Force rebranded the T-X as the T-7A Red Hawk, named in honor of the Tuskegee Airmen.

The first T-7A is expected to be delivered sometime in 2023, along with new flight training simulators.