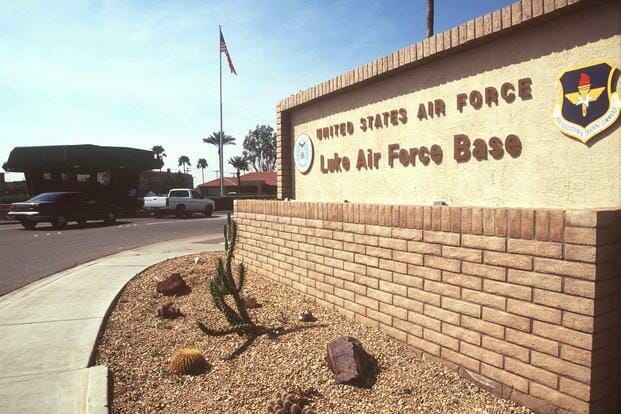 An airman at Luke Air Force Base in Arizona is facing punishment under the Uniform Code of Military Justice after an investigation showed he faked racist texts claiming he was denied a special duty assignment.

The alleged texts between airmen at the base were shared in May on the popular Air Force amn/nco/snco Facebook page, where service members often go to vent and share insider information. The exchange quickly went viral and, days later, the service said it was investigating the incident. Five months after the screenshots were shared, Luke Air Force Base spokesman Sean Clements said the investigation showed the messages were fake.

“The 56th Fighter Wing has concluded its investigation into reports that an airman was denied a special duty assignment by their supervisor based upon their demographic identity,” Clements told Military.com in an emailed statement Tuesday. “Following an exhaustive investigation, authorities determined that the statements published did not occur and the text messages were fake.”

Screenshots of the faked messages posted May 4 to the Facebook page alleged to show a conversation between a Black airman and a white superior regarding a special duty assignment.

Special duty assignments are grueling but important jobs, such as being a recruiter or drill instructor, that require service members to volunteer and be vetted. They often look good for promotions in a noncommissioned officer’s career and can lead to bonus pay.

“We won’t be sending your name up for [redacted] at the squadron,” the superior’s message said. When pressed why the Black airman was being denied the opportunity, the airman said. “We personally do not feel as if you are a good choice for the squadron. You currently have a shaving waiver which isn’t a professional image, and I think the Air Force is looking for somebody of white complexion and with the image that the Air Force needs.”

The service member, who the base says faked the exchange and who was not named, is facing UCMJ punishment, Clements told Military.com. He did not comment any further on the incident adding “the airman can still appeal his punishment.”

While the messages between the Luke Air Force Base service members were determined to be fake during the investigation, they centered around a very real issue in the military.

Some service members receive shaving waivers because they get frequent ingrown hairs and skin irritations known as pseudofolliculitis barbae, or PFB. The condition is often found in curly-haired men and occurs in about 60% of African American men, according to studies by the American Osteopathic College of Dermatology.

Beards are allowed in the Air Force only with a religious or medical waiver. Notably, some African American service members said that obtaining a shaving profile harmed their careers.

A survey conducted for a 2021 study for the journal Military Medicine showed that, of those who had received shaving waivers, 21.4% said it had a negative impact on their careers. The majority of those — 63% — who said it had harmed their careers or created negative bias within their unit were African American.

In August, three months after the screenshots of the alleged messages went viral, the Air Force and Space Force began discussing a pilot program that would allow airmen and Guardians to grow beards.

The investigation into the faked messages is reminiscent of a 2017 incident at the Air Force Academy Preparatory School, where racial slurs were written on the dormitory whiteboards of five African American cadet candidates.

The school later revealed that, during its investigation, one of the cadet candidates allegedly targeted by the racist remarks was actually responsible for the act, the Colorado Springs Gazette reported at the time.