Applications to Air Force Academy Bounce Back After Plummeting During Pandemic 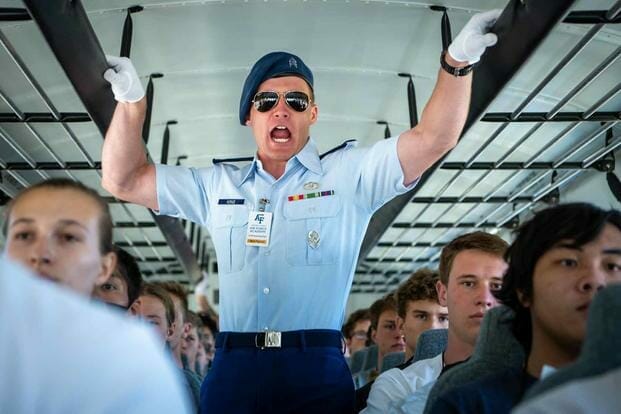 Applications to join the Air Force Academy’s class of 2027 skyrocketed last year, following a year when the school saw a dive in applications from young men and women during the coronavirus pandemic.

More than 10,000 students had applied to be part of the class of 2027 as of the Dec. 31 deadline. That’s a 21% increase from the more than 8,300 applicants who wanted to join the class of 2026 the year before, according to Air Force Academy spokesman Dean Miller. The school said last year’s low application numbers were due, in part, to the pandemic limiting how many in-person events it could hold for high school students.

“USAFA Admissions was able to conduct and attend more in-person recruiting events for this next class of future leaders,” Col. Arthur Primas Jr., director of admissions for the academy, told Military.com in an emailed statement Tuesday. “We believe our ability to directly influence young men and women, both on campus and in the communities, played a significant role in the increase in applications this year.”

Military.com reported in August that applications to all of the service academies dropped significantly for the class of 2026 that began school this past fall — declines ranging from 10% to nearly 30% — as the military continues to grapple with recruitment issues amid a national dip in college enrollment during the pandemic.

“A lot of schools did not allow us access to a lot of gatherings and a lot of conferences. … A lot of those things were canceled,” Primas told Military.com in August. “So we really had to shift for the class of 2026 onto a virtual platform.”

The decline in service academy applications mirrors a trend seen in the civilian world. Undergraduate enrollment declined by more than 662,000 students — 4.7% — from spring 2021 at civilian colleges, according to a report by the nonprofit National Student Clearinghouse Research Center.

Overall, the country’s undergraduate student body dropped by nearly 1.4 million students, or 9.4%, during the two years of the pandemic.

Officials at the Air Force Academy said they’re competing for the same students as other universities, and were feeling those same effects for the class of 2026.

“As the Air Force Academy admissions office, we obviously have to stay in tune with the higher education enterprise and those trends … because this is a four-year institution and we are all competing for the same talent,” Primas told Military.com in August. “So, we believe, part of it is those that may feel like college is no longer part of their future career path.”

The Air Force Academy wasn’t the only service academy seeing the decline. The U.S. Naval Academy saw a 20% application drop for the Class of 2026, and the U.S. Military Academy at West Point saw about a 10% decrease from the prior year.

Officials from both schools pointed to pandemic-related recruitment issues as the main reason for the decline in applications and were not concerned about interest in the service academies waning.

“We do anticipate based on census data that we will see (along with all institutions of higher education) a decrease in applicants in the next several years — but do not see a decrease in the quality of those applicants,” Francis J. DeMaro Jr., a West Point spokesman, told Military.com in August. “We do not translate this as a decreased interest in West Point or Service Academies as a whole, but more of a dynamic of the higher education landscape at this time.”

The application deadline for West Point and the Naval Academy’s class of 2027 is Jan. 31.