Bases Looking to Save a ‘Sheep’ Load of Money on Yardwork 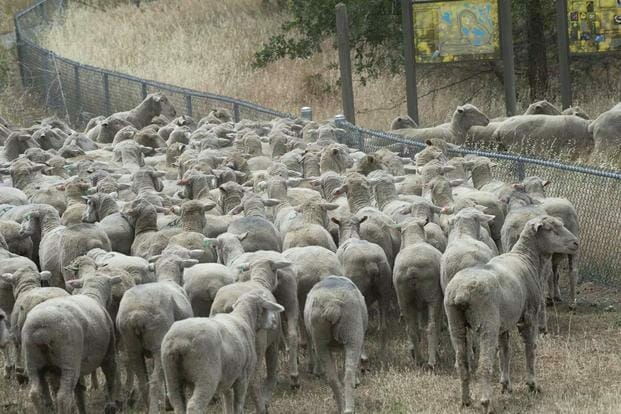 You “herd” it right here, it’s “wooly” true that farm animals are serving in the military’s fight against wildfires and invasive plants.

Travis Air Force Base in California released around 1,000 sheep earlier this month to help cut down on the blazes and stop non-native plants from growing at the installation and destroying the local ecosystem.

The sheep are reportedly getting rid of the base’s overgrown weeds and eliminating the need for herbicides or machinery, according to Travis public affairs.

Read Next: US, Allies ‘Intensifying’ Effort to Arm Ukraine with New Types of Weapons, Austin Says

“Not being able to mow those locations is not an option now that fire season is basically year-round,” the 60th Civil Engineer Squadron environmental office said in a statement to Military.com. “The sheep work just as well as a mower and can actually eat in areas where mowers can’t go with the added benefit of not sparking fires.”

The base, home to the 60th Air Mobility Wing, began its grazing program in the Castle Terrace area in 2018 with around 300 sheep and a dozen goats. The base has tripled the number of sheep since then, part of its broader efforts to protect local wildlife and stop wildfires before they begin.

“We are targeting barbed goatgrass and tall non-native grasses, many of which are not palatable to grazing animals once they have flowered because of barbs and awns attached to the seeds,” said Lauren Wilson in 2018 when the program launched. Wilson serves as the regional natural resource manager and biological scientist with the Air Force Civil Engineer Center Installation Support Section at Travis.

Barbed goatgrass and other non-native plants growing around the base previously created extra maintenance work for service members. They also put endangered local species like the California tiger salamander at greater risk of losing their habitat.

The small, yellow-spotted amphibian shares its home in Sonoma County with Travis Air Force Base, and is already considered to be critically threatened, according to the U.S. Environmental Protection Agency.

Invasive plants also burn more readily than native species, according to the National Invasive Species Information Center, and can increase the risk of wildfires — an already serious challenge in the West. As of May 20, California has already seen more than 2,000 fires and over 9,000 acres burned.

Beale Air Force Base, also in California, has had a similar long-standing livestock grazing program. The installation has partnered with local cattle ranchers to bring in approximately 2,000 cows between November and May each year to eat invasive species. With less grass after grazing, fires move less rapidly, and damage is minimized. The program is expected to continue this fall, according to Beale public affairs.

“This grazing method saves time and money, reduces fire hazards and protects the environment,” according to Travis public affairs.

Editor’s note: This story was updated to more prominently reflect the sheep’s role in preventing wildfires.

Related: At Marine Base, Officials Must Protect Endangered Tortoises from Murderous Ravens