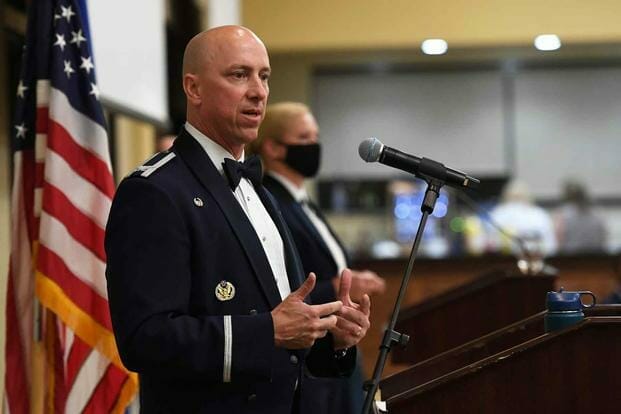 The commander of the Air Force’s training unit at Keesler Air Force Base near Biloxi, Mississippi, has been removed from his duties.

Maj. Gen. Michelle Edmondson, head of the Second Air Force, relieved Col. William H. Hunter from his role as commander of the 81st Training Wing on Tuesday due to “a loss of trust and confidence” in the officer, according to a press release.

“Commanders must uphold the highest personal and professional standards and maintain a healthy, inclusive command climate in their unit,” Edmondson said in the release. “We remain committed to the success of Keesler’s mission.”

Read Next: Army Sergeant Killed at Georgia Base Was an Afghanistan Veteran

The services often don’t disclose specifics of why a commander is fired, typically citing the federal Privacy Act, which protects military records, and relying on the phrase “loss of trust and confidence” instead of detailing the reasons behind a shake-up, including whether there was misconduct.

Hunter has been in the Air Force since July 1997, first commissioning through the Air Force Reserve Officer Training Corps at the University of Washington in Seattle, according to information provided to Military.com by the Air Force Personnel Center.

His assignments during his 25-year career have taken him to Colorado, Texas, Florida, Hawaii, Guam and the Pentagon. He had served as the commander of the 81st Training Wing at Keesler since June 2021.

Hunter could not be reached for comment by numerous phone numbers listed for him in public records.

The 81st Training Wing, located on the Gulf Coast of Mississippi, educates more than 28,000 students annually with an average daily student load of more than 2,700, according to Air Education and Training Command. That unit is also a joint training installation, where Army, Navy, Marine Corps, Coast Guard and civilian employees with federal agencies train as well.

Col. Jason D. Allen has temporarily been appointed as commander of the 81st Training Wing. Hunter’s removal follows a string of commander shake-ups in the service this year.

In October, the commander of the 8th Maintenance Group at Kunsan Air Base in South Korea was fired. In August, the head of the Alabama Air National Guard’s 187th Fighter Wing was relieved and, a month prior, the commander of a New Mexico-based Air Force special operations medical unit was removed.

All three were removed due to a loss of trust and confidence, according to the Air Force, Stars and Stripes and local media outlets reported.

Related: 21 Avenger Salute: Congress Sentences a Batch of A-10s to the Boneyard for the First Time in Decades