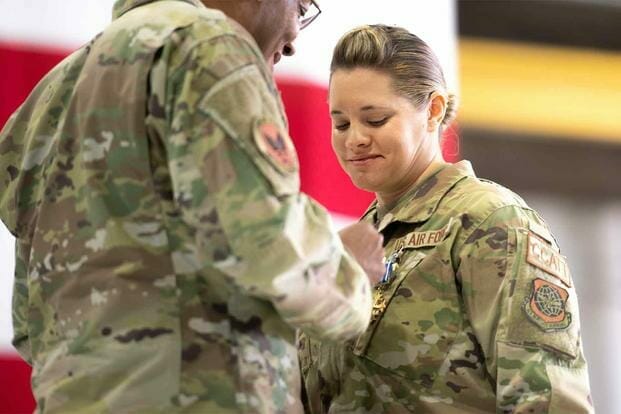 Members of a C-17 Globemaster crew who helped deliver a baby in the middle of a chaotic Afghanistan evacuation flight last year will be awarded the Distinguished Flying Cross next week, as the Air Force continues to clear a backlog of awards related to the mission.

“We are proud of the accomplishments of the dedicated crew and thankful that they are being recognized in such a distinctive way,” Col. John F. Robinson, Charleston’s 315th Airlift Wing commander, told Military.com in an emailed statement Friday.

Since 1927, when it was first awarded by then-President Calvin Coolidge, the Distinguished Flying Cross has been given to service members for acts of heroism during aerial operations.

Typically, Air Mobility Command service members assist combat operations indirectly and do not often see the kind of action that makes them eligible for the award. But last month, the Air Force announced it would be awarding 96 Distinguished Flying Crosses, 12 Bronze Star Medals and one Gallant Unit Citation to airmen who assisted with the largest non-combat air evacuation operation in U.S. history.

Minihan will award a total of 36 Distinguished Flying Crosses at Joint Base Charleston on Monday. The service has faced months of delays since the Afghanistan evacuation in recognizing airmen for bravery. Leadership previously expected that a review backlog would likely remain into 2023.

When Minihan announced the number of awards last month, he admitted the service should have recognized these airmen’s efforts sooner and worked to speed along the awards process.

“Make no mistake, we should have done this last year immediately after the operation, and I recognize our airmen’s frustration with the process,” Minihan said in late October. “We’re making that right, and we’ve worked with our partners across the Air Force to ensure AMC is able to swiftly and effectively recognize our mobility warriors.”

The baby born during the C-17 flight was one of several children who were delivered during the Afghanistan evacuation.

On Aug. 23, 2021, while in a holding pattern waiting to land after evacuating Kabul, Conner received a report from loadmaster Schmidt that there was a woman in distress who shut herself in the lavatory.

Green, an Air Force flight nurse, discovered the woman in the bathroom was in labor. At about 1,000 feet in the air, Schmidt and Green began to help her give birth.

“The baby was perfect! … a little bit small; it definitely didn’t make it full term, but it came out crying,” Green said in a press release describing the incident last year. “She [the baby] seemed to be doing well in this world.”

Adams, who was helping to pilot the plane, said Conner made one of the smoothest landings he ever saw after the baby was born.

“Someone said, ‘We took off with 270 children, and we landed with 271,” Adams said in a press release last year.

A spokesman for Air Mobility Command told Military.com that about half of the 96 Distinguished Flying Crosses still need to be awarded.

The Afghanistan evacuation effort saw the final U.S. casualties of the war when a suicide bomber struck at the airport’s Abbey Gate on Aug. 26, 2021, killing 13 troops — 11 Marines, a sailor and a soldier; wounding more than 20 other troops; and killing or wounding hundreds of Afghans.

Orellana was among the first to respond to the casualties at Hamid Karzai International Airport that day, and she helped evacuate and save the lives of 22 service members and refugees over an eight-hour period.

“I joined the team a week prior and had to trust they knew what they were doing, and when we went in, we just did our jobs,” Orellana said in a Thursday press release. “And we did really well.”

Brown said during the ceremony that Orellana’s award was the first Distinguished Flying Cross he had presented during his career.

More awards outside of the nearly 100 announced in October are still on the way. Air Mobility Command said 350 additional individual awards were approved for Operation Allies Refuge, and individual commanders have approved more than 4,500 medals that didn’t require a board review for Mobility Air Forces airmen who supported the operation.