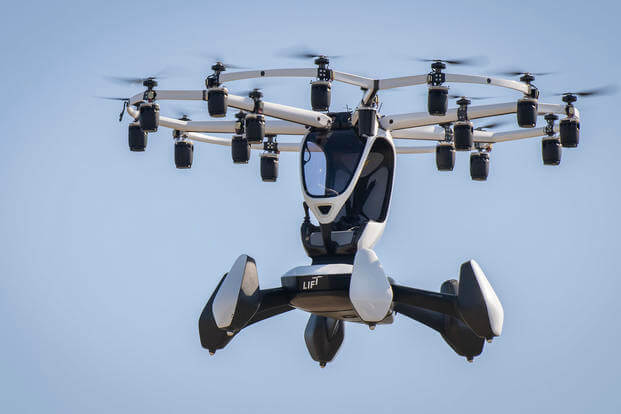 In 2019, Assistant Secretary of the Air Force for Acquisition, Technology and Logistics Will Roper made an exciting and unexpected announcement: the service was developing an acquisition strategy to get into the burgeoning market for futuristic flying cars, maturing the technology through design challenges and possibly coming up with a platform that could replace the service’s CV-22 Osprey. In future talks, he provided a timeline: these flying cars could be rolling off the production line by 2023.

With that target date fast approaching, the Air Force continues to work on the base technology: an electric vertical takeoff and landing (eVTOL) unmanned aircraft that may come in a range of sizes and support missions ranging from cargo delivery to golf cart-style transport that can shuttle troops short distances across ranges and training areas. But whatever it looks like and does, Air Force officials really, really want you to stop calling it a flying car.

“We have shied away from flying cars, because that’s not what’s not what they are,” Lt. Col. Thomas Meagher, chief of the AFWERX Prime division, which oversees the development, told Sandboxx News. “It’s also not what industry is calling it.”

(Once again, Roper is responsible for starting and encouraging the “flying car” moniker. He told reporters at the Pentagon in 2020 that “now is the perfect time to make the Jetsons’ cars real.”)

One Platform, Many Roles

While little has been published recently about the project that AFWERX is now calling simply eVTOL or ORB, it’s still very much in progress, and officials say they’re still targeting late 2023 for fielding. It’s now a three-pronged effort, with all prongs coalescing to create “a new class of air mobility systems,” according to AFWERX Prime materials.

AFWERX is looking for platforms that can meet one of three specifications: a transport for three-eight personnel that can travel between 150-300 miles; a shorter-range, shorter capacity platform that can move loads of 300 or 400 pounds, roughly the equivalent of two people; and a crewed or uncrewed eVTOL platform purely for cargo transport and delivery with a range of about 100 miles.

“What we’ve seen in the military is, we’ve had a significant effort over the last couple of years on drones, for different purposes,” Meagher said. “But we haven’t gotten much into the uncrewed or remotely piloted or, or even eventually, autonomous cargo operations, which certainly will be of interest moving forward.”

Stated priorities for all platforms include being able to operate independently of a runway, incorporating some measure of autonomy, and using advanced manufacturing and materials.

In March, the program ticked off a major developmental milestone: two Air Force pilots conducted a test flight in Alia, an electric plane with a rear propeller and 50-foot wingspan made by Beta Technologies. That, Meagher said, represented the first time Defense Department personnel had gotten behind the controls of an eVTOL aircraft.

Also this year, AFWERX Prime started test operations at a designated testing range at Eglin Air Force Base, Florida. In April, a single-seat eVTOL aircraft called HEXA, made by LIFT Aircraft, conducted a flight demo at Eglin. The futuristic ultralight platform gets lift from 18 small propellers similar to those on commercial quadcopters. Eglin officials say it got 50 feet off the ground during the test.

Later this year, Meagher said, AFWERX Prime will team up with the Army for another test near Vermont, home of Beta Technologies. The Army has also expressed interest in Alia’s potential, and awarded Beta a contract to support further flight testing in January.

“Other things we’re looking at is, how we continue to get more Air Force operators involved in seeing some of the flight tests with the vehicles,” Meagher said. “We’re continuing to do site surveys as other vendors begin to have more assets available, and seeing what we can get out of other test locations.”

In all, AFWERX has partnered with 13 companies offering electric aerial vehicles for testing and development. Joby Aviation, offering an aircraft with six large top propellers, received approval from the FAA and Air Force in January to test out a second prototype aircraft.

The Marine Corps joined forces with AFWERX for eVTOL testing back in 2020, stating its interest in a moderate-sized unmanned cargo aircraft for delivering supplies on the battlefield or during expeditionary advanced base operations. Flying Magazine reported in May that the Corps was looking to debut such a platform as soon as next year.

Partnerships with other military branches – as well as non-military entities including the FAA and NASA – are at the core of what AFWERX is trying to accomplish, Meagher indicated. He said his organization has worked to share as much data and information as possible, so that partner services and agencies don’t have to start development work from scratch.

“We want to avoid what happened on the small UAS market, where the U.S. did not take a lead,” Meagher told Sandboxx News. “And then all of a sudden, we were significantly behind the game. And other countries came in, and kind of dominated that market quite a bit.”

The Future Challenges for eVTOL Platforms

AFWERX Prime shares what it has learned with the FAA as it evaluates vehicle prototypes. It also takes advantage of that communication channel to state priorities and concerns as the administration develops regulations around unmanned and optionally manned aircraft. This means the Air Force’s experiments may also help create new space and opportunities for civilian and commercial platforms.

NASA, Meagher said, was supporting the project through data sharing – the agency has been able to help characterize the acoustic profile of prototypes like Joby’s, verifying how quiet and non-disruptive the platform is. NASA has also done work on the problem of incorporating unmanned aircraft into an air traffic management system, which benefits ongoing military experiments.

A future challenge, Meagher said, involves building more automation into eVTOL platforms, and even scaling automation so that one human operator could control multiple air vehicles at the same time.

“The Prime program structure is, look at the areas that there’s a lot of commercial investment, and maybe you really could use a government push in certain area, or even just coordination or somebody to say … This is a priority for us, and to bring in some things that are outside just the DoD to make them happen in the long run,” he said. “So that’s a little bit of a different approach. But it’s really necessary for some of these technologies.”