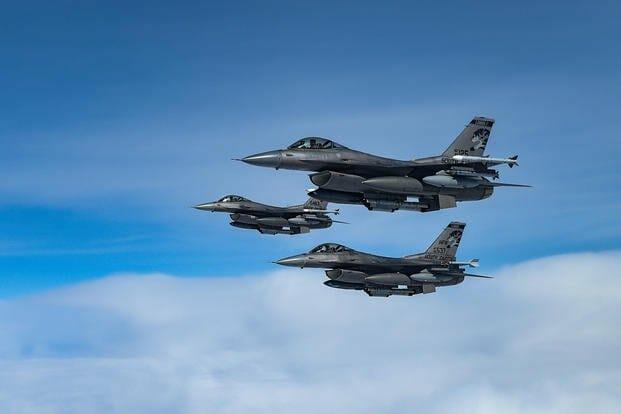 An F-16 Fighting Falcon fighter jet skidded off a runway and stopped when its nose cone dipped onto the airfield during a training mission in South Dakota on Wednesday, according to the Air National Guard.

An unverified image of the fighter jet, based out of the 114th Fighter Wing in Sioux Falls, began circulating online. The Air National Guard issued a statement about the incident on Facebook shortly after the picture was posted, explaining that the aircraft “went off the end of Runway 15 at Joe Foss Field.”

The crew and pilot were safe, emergency crews came to the scene and the Air National Guard is investigating the incident, according to the 114th Fighter Wing. No details are being released about the pilot.

“Even though we train to do this every day, there is still risk involved. We are grateful that no one was harmed in this incident,” Col. Mark Morrell, the 114th Fighter Wing commander, said in a statement.

But Wednesday’s runway mishap is the latest in a string of landing mishaps and crashes seen this year with the Air Force’s jets.

In late March, an F-16 piloted by the son of a candidate to be the Oklahoma attorney general crashed in rural Louisiana during a training exercise.

The Air Force has been flying the earliest versions of the F-16 since the late 1970s and specifically the F-16 C/D variant — which is flown by South Dakota’s 114th Fighter Wing — since the mid-1980s.

There were three F-16 mishaps last year, according to the Air Force Safety Center. One of the crashes led to the death of a pilot and the plane being completely destroyed.

The same week as the F-16 crash in Louisiana, airmen began posting an image of an F-22 Raptor with its nose buried in the ground at Eglin Air Force Base, Florida, after the aircraft had an apparent landing gear mishap.

An almost identical incident happened with another F-22 at Eglin last year, when a pilot experienced an in-flight emergency and the front landing gear didn’t operate properly, causing the nose to dip and impact the ground on the runway.

Evidence from Wednesday’s incident is being collected for investigation by an Interim Safety Board, according to the 114th Fighter Wing.

Mackenzie Eaglen, a senior fellow at the American Enterprise Institute who specializes in military readiness, told Military.com after the F-22 mishap that these frequent mechanical issues cause serious problems for the force.

“There is a link between the age of aircraft requiring more maintenance, which leads to reduced flying hours,” Eaglen said. “This is the smallest, oldest Air Force in history.”

In last year’s budget request, the service wanted to slash flight time by roughly 87,500 hours because of the heavy costs associated with maintenance of many aging aircraft.

In this year’s budget, the Air Force is requesting 1.1 million flying hours — the most the service can take on financially and the most its aging aircraft can handle.

Related: Air Force Will End Program That Allowed Some Airmen to Choose Their Next Duty Station