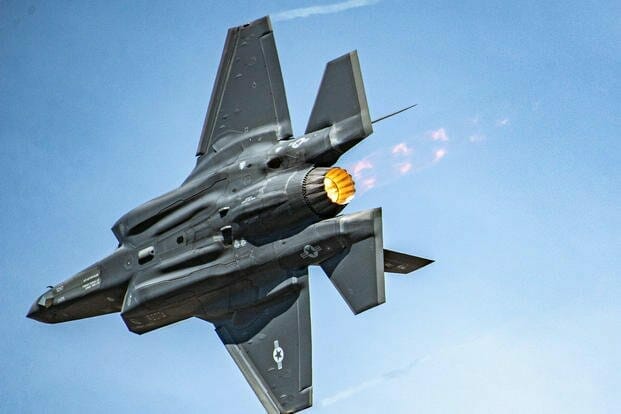 This year marks the 20th anniversary of the issuance of contracts to develop the F-35 Lightning II, America’s fifth-generation fighter aircraft. Since its launch, the program has set the standard for the incorporation of new technologies and components into fighter aircraft, such as thrust vectoring, composite materials, stealth technology, advanced radar and sensors, and integrated avionics to greatly improve pilot situational awareness. But the time has come for necessary upgrades.

Specifically, planned air vehicle growth on the F-35 will exceed the current thrust, power and thermal management (PTMS) capabilities on the fighter jet’s F135 engine by the end of the decade. As a result, a propulsion overhaul is needed. There are two schools of thought about how best to accomplish this goal.

Many policymakers in Washington favor a suite of upgrades to the existing F135 engine known as the Enhanced Engine Package (EEP). These modifications would allow the aircraft to continue to meet operational requirements by improving thrust and range by more than 10% each and providing a 50% improvement in thermal management. As a retrofit, it would also allow the military to maintain the F-35′ current supply chain, infrastructure and sustainment network.

Despite the clear advantages of pursuing this option, some at the Department of Defense are pushing to instead create an entirely new engine from scratch for the F-35 known as the Adaptive Engine Transition Program (AETP). The program, which was previously viewed as unnecessary and as a result was terminated with a bipartisan consensus, has recently been the beneficiary of a new aggressive push in Congress. But resurrecting the AETP now would be a mistake.

For starters, the price tag to develop and produce the AETP could top $6 billion. As Air Force Secretary Frank Kendall put it, that could lead to a “hard trade-off” in operational resources because, in rough terms, that cost amounts to 70 F-35 fighter aircraft that might not be procured due to new engine development costs. It’s also worth noting that even more F-35s could be on the chopping block if — as is too often the case with procurement projects of this ambition and scale — costs outpace budgets and deadlines are missed.

Given the fact that the United States already has “a fighter gap problem” as some military analysts have put it, and the fact that the Air Force is on track to shed more than 1,500 aircraft over the next five years, any further reduction in service aircraft will significantly diminish America’s ability to deter and defend against threats.

Design differences between the AETP and the F135 engine would also mean the Air Force would likely have to field the new engine alone, as the other services can’t fit the AETP power plant in their versions of the fighter. The F-35C is the Navy’s first stealth fighter and the world’s only 5th generation, long-range stealth strike fighter designed and built explicitly for aircraft carrier operations. But the aircraft carrier modifications that would be required to integrate the AETP engine onto the F-35C are beyond the budget of the Navy. The F-35B STOVL Marine Corps variant, meanwhile, is currently totally incompatible with the AETP engine.

In practical terms, this all means that, should the Air Force pursue the AETP engine, it would break the commonality that is a hallmark of the F135 and create serious repair and supply chain issues. An entirely new procurement and maintenance infrastructure, concurrent to that of the F135, would be needed to source production and maintain operational capability for a new AETP engine.

But what could be of the greatest concern, given current geopolitical challenges, is the fact that implementing the AETP would take at least half a decade. Given the fact that such major procurement programs rarely stay on schedule, the true timeline for such upgrades would probably be even longer. Our time and taxpayer dollars would be better spent developing an AETP-like engine for the 6th generation fighter of the future.

The proposed AETP timeline is too long to be impactful and to keep up with the ever-changing threat environment. Russia’s war on Ukraine and the threat it poses to our NATO allies, Chinese aggression in the Taiwan Strait and the fact that Iran is now openly speaking about nuclear bomb prospects all highlight the fact that such a capability gap would be a significant detriment to American national security.

The F-35 is currently a cornerstone of America’s ability to project power in the skies. But we must make smart decisions now to ensure that continues to be the case. While the AETP will likely be an important part of any sixth-generation fighter aircraft, and it is important to keep an eye to the future, current threats dictate that we focus on the here and now.

Concentrating on modernization and upgrades, rather than investing billions of taxpayer dollars on an unnecessary new system, is the best way to secure the ongoing operational capabilities of the F-35 fighter as it marks this major inflection point.