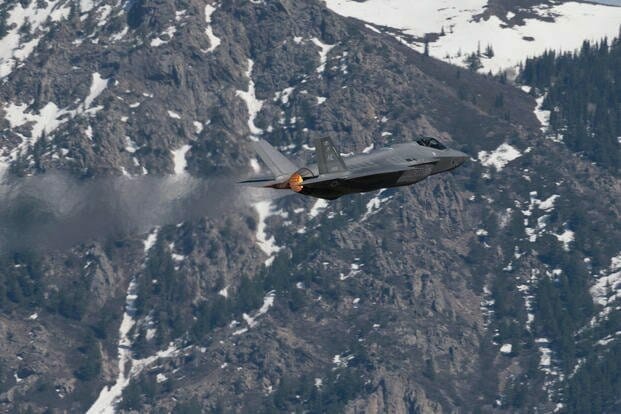 An F-35A Lightning II crashed at Hill Air Force Base in Utah on Wednesday night, forcing the pilot to eject and causing wildfires on the base.

Around 6:15 p.m. local time, the fighter jet crashed on the runway, and on-base and off-base emergency response personnel immediately rushed to the scene. The pilot, who was not identified, was safely recovered and taken to a hospital to be examined.

“The pilot ejected, was recovered and has been taken to [the] local medical center for observation,” Hill Air Force Base tweeted. “The cause of the crash is unknown and will be investigated.”

Read Next: Over 41,000 VA Patients Warned of Delayed Care Due to Troubled Electronic Records System

Col. Craig Andrle, commander of the 388th Fighter Wing, told news outlets in Utah during a press conference that the pilot was on his way back to the base when the crash occurred. He said he was grateful the F-35 pilot was able to avoid other damage while the aircraft was plummeting.

“Flying military aircraft is a risky business that we all accept when we go do it, and these things happen,” Andrle said, according to CNN. “And so tonight, first and foremost, we’re thankful that he’s OK. He got out of the aircraft. We’re thankful that nobody on the ground was injured.”

Residents near the base in Ogden, Utah, began posting photos on social media showing plumes of smoke wafting from the base.

“They land generally toward the south as they did today,” nearby resident Scott Phillips told CNN. “On approach, one appeared to lose power and dipped too low below the trees. Next thing I saw was fire.”

The crash caused an estimated 10-acre wildfire, according to a tweet from Utah Fire Info. Andrle told reporters the fire was extinguished in roughly an hour.

There have been a total of five Class-A mishaps, the term the Air Force uses for its most expensive or deadly crashes, involving the F-35 since 2014, according to the latest data from the Air Force Safety Center. The previous crash was in fiscal 2020.

The price per unit of an F-35, including costs like depot maintenance, ground support equipment and spare parts, is $110.3 million per F-35A; $135.8 million per F-35B, the Marine Corps’ variant; and $117.3 million per F-35C, the Navy’s version of the aircraft, according to data from the Center for Arms Control and Non-Proliferation.

In late July, Air Combat Command stood-down its fleet of F-35As after a recall related to the aircraft’s ejection seats worried officials. By mid-August, the fighter jets were back in the air.