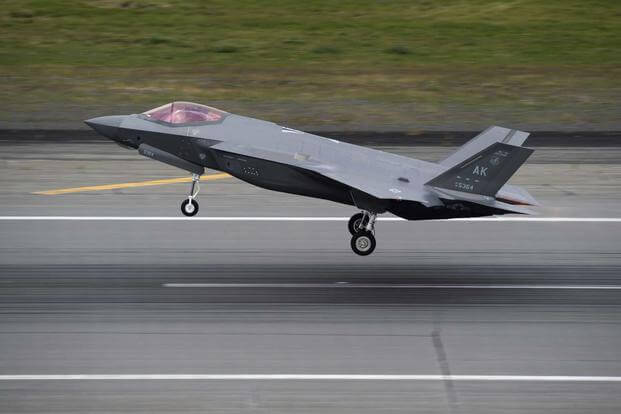 A widespread issue with ejection seats that impacted hundreds of aircraft across the U.S. military last week was first discovered on an F-35A Lightning II back in April, but the Air Force didn’t ground its jets for three months as it investigated.

Martin-Baker, a U.K. manufacturer, said there was a problem with certain productions of its cartridge-actuated devices — explosive components used to launch an ejection seat out of the cockpit. The company said it was first discovered this past spring at an Air Force base in Utah.

“During a routine maintenance inspection at Hill AFB in April ’22, an anomaly was discovered with one of the Seat Cartridge Actuated Device (CAD) in the F-35 seat,” said Steve Roberts, a spokesman for Martin-Baker. “This was quickly traced back to a gap in the manufacturing process which was addressed and changed.”

Read Next: 13-year-old Accused of Starting Fires at Nellis Air Force Base Housing

Alexi Worley, a spokesperson for Air Combat Command, or ACC, told Military.com in a statement that the unit began inspecting a selection of ejector seat cartridges immediately, but the issue became more severe when it was traced back to a failure on the production line. The command, which controls most of the Air Force’s 300 F-35s, grounded them in late July.

“Based on the known data at the time, the aircraft was deemed flyable with an acceptable level of risk,” Worley said in a statement. “As these inspections continued to take place, a higher number of suspect cartridges were found, leading ACC to stand down its fleet to conduct the remainder of the inspections.”

Shortly after, the 19th Air Force’s Air Education and Training Command, or AETC, grounded nearly 300 of its T-38 Talon and T-6 Texan II training planes because they use the same Martin-Baker part and were made aware of the ejection seat problem. On July 28, the command again began flying its trainers after each aircraft passed an ejector seat inspection.

ACC began a 90-day inspection of all the components in its aircraft on July 19. Ten days later, it stood-down the entire F-35 fleet to speed up the process.

“As each aircraft inspection is completed and deemed compliant, the aircraft is cleared to resume flying operations,” Worley said.

AETC also stood-down its F-35s “to allow logistics teams to further analyze the issue and expedite the inspection process on the F-35 fleets,” according to a statement from the unit.

Capt. Lauren Woods, a spokesperson, said “a portion of the AETC F-35 fleet has been inspected and cleared for flight, with inspections continuing on the remaining aircraft.”

Martin-Baker said the issue appears to affect only the F-35, adding that the company has been providing the military with data about the particular parts that are faulty.

“This issue was found to be unique to this particular CAD part number and unique to the F-35, Martin-Baker has been providing the primes and multiple Govt agencies with supporting data to prove that all other aircraft may be excluded,” Roberts said. “Outside the F-35, not a single anomaly has been discovered worldwide as a result of the forensic investigation which continues at pace.”

Roberts did not immediately respond to a Military.com inquiry asking why the other groundings would occur if the problem was isolated to the F-35.

Mackenzie Eaglen, a defense policy fellow at the American Enterprise Institute, a Washington-based think tank, said the ejection seat issue is just the latest maintenance worry facing the F-35. It comes on the heels of a Government Accountability Office report last month saying the aircraft faces more groundings due to engine troubles and a lack of repair capability.

“I can say the F-35 is grounded too often, which impacts operations, readiness and our conventional deterrent,” Eaglen said.

Congress has paid close attention to ejection seat problems after the 2020 death of 1st Lt. David Schmitz, an F-16 Fighting Falcon pilot with the 77th Fighter Squadron out of Shaw Air Force Base, South Carolina. Investigations after his death found that an ejection seat malfunction was partly to blame.