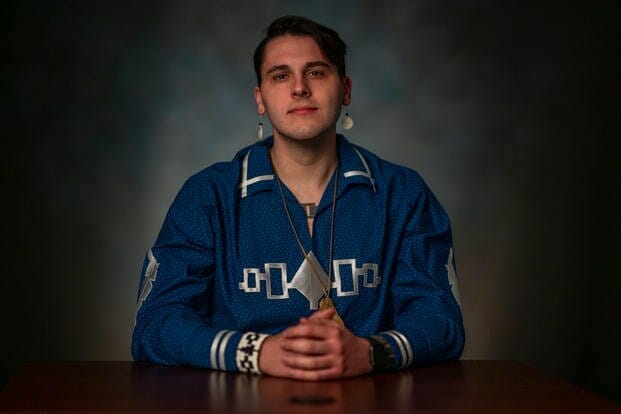 An Indigenous airman, who had to cut his braids when first joining the Air Force two years ago, is now one of the first in the service to receive a religious waiver allowing him to grow longer hair in accordance with his heritage.

For Airman 1st Class Connor Crawn, a convoy team leader with the 341st Missile Security Operations Squadron at Malmstrom Air Force Base, Montana, keeping his hair long is part of his Kanien’kehà:ka faith. When he enlisted in the Air Force in 2020, he requested a religious waiver. But as his date for basic military training continued to be pushed back because of his hair, he decided to cut his braids so he could start earlier.

“My dad and I cut our braids together,” Crawn said in a Thursday press release. “I wish I never had to go through that. I felt like a part of me died when I lost my braid.”

Read Next: Legionella in Water at Joint Base San Antonio Medical Barracks After Weeks of Failed Cleanup Efforts

Crawn said in the press release that long hair reflects spiritual strength, protection and resilience for the Kanien’kehà:ka, also known as Mohawk by non-Kanien’kehà:ka, and braids can symbolize even greater strength.

After graduating from boot camp and technical training, Crawn was stationed at Malmstrom’s 341st Missile Wing in July 2021. There, he worked with the base’s chapel to restart the religious accommodation process.

While a religious accommodation was supposed to take 60 days, an influx of requests related to the COVID-19 vaccine delayed Crawn’s answer for nearly a year and a half.

“I knew it was going to take longer than expected,” Crawn said in the news release. “After a year passed, people used to joke that it would be the end of my contract before I heard anything — and honestly, that’s what I was beginning to expect.”

Capt. Trevor Wilson, one of the chaplains at Malmstrom, pushed to make sure Crawn’s application wouldn’t get lost in the shuffle.

“I had to ensure his request would not get lost or overlooked in the bulk of all that [COVID-19] paperwork,” Wilson said in the news release. “I regularly followed up and tracked his request, because part of my role as the chaplain is to be an advocate.”

Finally, this past October, Crawn was granted approval. He was authorized to abide by female standards for dress and personal appearance, according to the press release.

At the beginning of 2021, the Air Force amended its approved hairstyle options for women, allowing them to wear their hair in two braids or a single braid or ponytail that extends as far as the bottom of the shoulder blades.

Crawn made a TikTok video about his experience getting the approval, and said he hopes it will inspire other Indigenous people to consider serving in the military.

“My first thought after calling my family was, ‘I gotta let other native men know that it’s possible,'” Crawn said in the press release. “I could not find a single person who received a religious accommodation like mine as I was going through the process, so I wanted to put the information out there.”

Crawn’s victory is the latest example of progressive hair, dress and religious accommodation requests that have been approved by the Department of the Air Force.

In August, Military.com reported that the Department of the Air Force is discussing a pilot program that would allow airmen and Guardians to grow beards, one of the most requested changes to uniform and grooming standards among service members.

In May, the Air Force and Space Force announced service members would be able to grow mustaches an additional one-quarter of an inch.

That same month, the Space Force released policies that increased color options for nail and lipstick to allow variations for women’s skin tones; let men wear inconspicuous concealer or foundation to cover up scars and blemishes; and granted new tattoo locations on the neck or behind the ear.

In February, a Hindu airman at Warren Air Force Base, Wyoming, who had been waiting nearly two years was granted approval to wear the Tilak Chandlo religious symbol — a red dot on the forehead — while in uniform.

Col. Barry Little, the 341st Missile Wing commander, said Crawn’s case is an example the service should take note of.

“There has never been a time where what our Airmen do for this country has been so important,” Little said in the news release. “Creating an environment of dignity and respect is critical to winning the strategic competition for talent. Our Airmen chose us once; the environment we create must encourage them to choose us again.”

Related: Hindu Airman Who Waited Nearly 2 Years Gets Waiver to Wear Religious Symbol While in Uniform