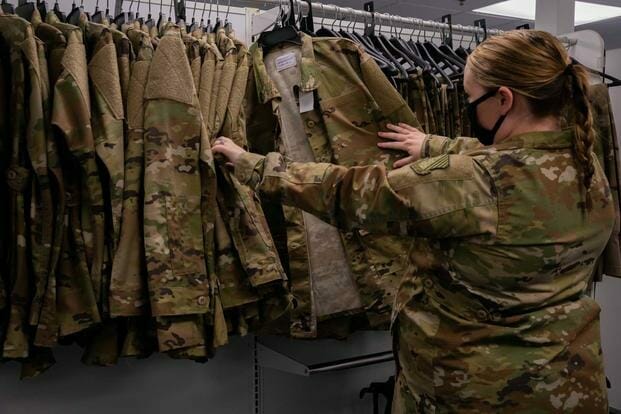 Army and Air Force maternity uniforms are expected to be back in stock at Exchange stores and online within about a month after demand that surpassed expectations left shelves empty for months.

Stores at installations have struggled to keep camouflage uniforms for expectant mothers available for the roughly 6,000 soldiers in the active-duty Army and its reserve components who are pregnant at any given time. Meanwhile, aftermarket companies selling virtually identical uniforms have more than doubled prices for items like the maternity coat and pants — which are supposed to cost about $38 each, according to the Exchange’s website — but have been going for $75 each on third-party websites.

“As supply chain challenges ease, [the Defense Logistics Agency] has resumed fulfilling orders,” a spokesperson for the Exchange said in a statement to Military.com. “Maternity uniforms are expected to be in stock in the coming weeks.”

A spokesperson for the Defense Logistics Agency, which oversees the development of uniforms, told Military.com a boost to the supply of maternity uniforms is expected to be fulfilled sometime in September.

Expecting mothers are entitled to be issued maternity uniforms by regulation. Active-duty women are supposed to be issued three sets of the uniform; National Guard and Reserve soldiers get two. But troops have long relied on the Exchange to purchase extra uniforms or in unforeseen circumstances such as losing a set or delays in receiving uniforms from a unit.

There are also bureaucratic burdens on expecting mothers to receive authorization to wear the maternity uniform, including getting a doctor to confirm the pregnancy. It must be properly documented, and then they must wait on their commander to approve a memo for wear.

The news comes after a complete production halt on hot weather camouflage uniforms for women amid a dispute with the manufacturer. The services, particularly the Army and Air Force, have tried to make military service more welcoming to women and parents who are needed to fill in the ranks in all roles, including combat arms.