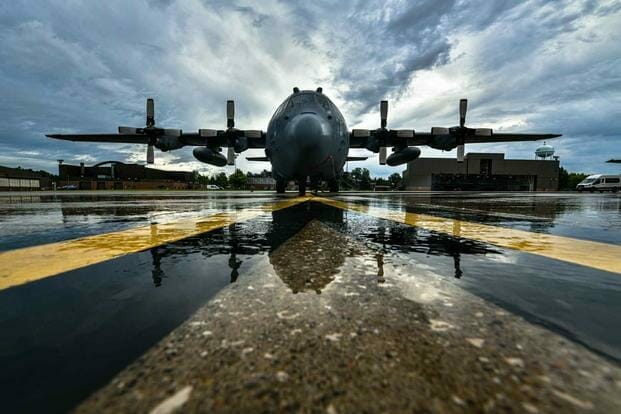 A longtime practice by Air Force mechanics is likely the reason propeller blades on C-130 Hercules have cracked, leading to more than 100 of the aircraft being grounded in late September.

Mechanics using electric arc pens to etch numbers into the propeller barrels during inspections caused some of the issues, an Air Force spokesperson told Military.com on Wednesday. That practice was stopped several months ago.

“The process used to engrave serial numbers on the propellers caused the cracking that is being found on the C-130Hs,” Air Force spokesperson Maj. Beau Downey said in an emailed statement. “That process…was stopped about six months ago and will not be used going forward.”

In total, 116 C-130Hs were grounded last month after a technician at Robins Air Force Base in Georgia noted a crack in a propeller barrel assembly during an engine run check.

Additional inspections showed that two other propeller assemblies also had cracks. This led to the service ordering widespread, one-time inspections on some of its older C-130H aircraft. The process to fix the propellers is complicated and will take some time.

“When the depot at Warner Robins Air Logistics Complex receives an unserviceable propeller hub and blade set from a field unit, they are inspected, overhauled, tested, and then prepared for shipment to the affected unit,” Downey said in an emailed statement. “This process involves complex inspections and repairs that cannot be accomplished at the unit level outside the depot.”

As of mid-October, two planes had returned to service. It’s not yet clear how long it will take Air Mobility Command to replace the propeller assemblies on all affected C-130Hs.

Lockheed’s C-130 Hercules has been used by the Air Force since the mid-1970s. Finding parts for older models isn’t easy, adding to the delay in getting the aircraft back in the sky.

Similar issues have popped up for C-130Hs in the past. More than 100 of the cargo aircraft were temporarily removed from service after wing cracks were discovered during routine maintenance in August 2019, Military.com previously reported.

Earlier that year, 60 C-130H Hercules aircraft were taken out of service to examine and replace engine propeller blades that inspectors deemed dangerous because they had been manufactured before 1971.

The C-130 Hercules is just the latest aircraft to be grounded by the service.

In mid-August, Air Force Special Operations Command ordered all its CV-22 Ospreys to stop flying after recording four hard clutch engagements since 2017, an issue in which power surges into one of the two engines on the aircraft. None of those incidents happened in combat, and none was fatal.

By September, the Ospreys were cleared to fly again, but the root problem still hasn’t been identified.

In late July, Air Combat Command grounded its fleet of F-35A Lightning II jets, and the 19th Air Force’s Air Education and Training Command stopped flying nearly 300 of its T-38 Talon and T-6 Texan II training planes over concerns about their ejection seats after a recall was issued on a part.

By mid-August, the F-35s and training planes were back in the air.