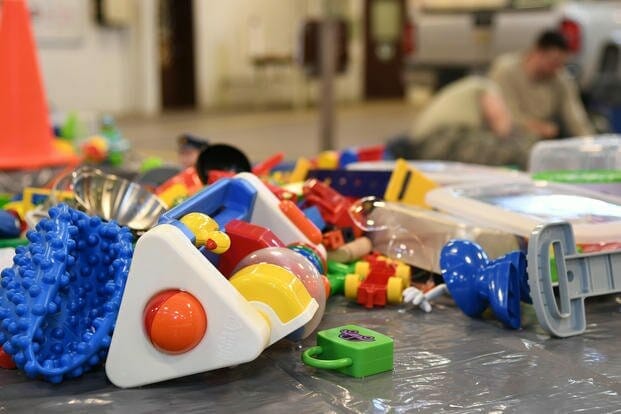 Editor’s Note: This story and headline have been updated to reflect a correction request, as well as additional information from the Navy. The service said that, while it was reviewing video in mid-October that showed instances of alleged abuse, it hadn’t fully watched the footage and therefore was unaware of alleged child maltreatment until November. The Navy said that, because it was unaware of the alleged abuse on the video tapes, it had not withheld that information from parents. Also, although the child care center referenced in the story did close twice around the time that two separate instances of child abuse allegations surfaced, the Navy said that those closures were unrelated.

Then, as the Navy kept reviewing the footage, the service said it found something worse. “On November 1st and 2nd, violations [of the Navy Child and Youth Programs] Touch policy were found and substantiated to be child maltreatment,” Hannah Moore, a Navy spokeswoman, told Military.com in an email.

Read Next: Here’s How Veterans Running for Congress Did in the Midterms

One parent who saw tape on Wednesday of staff interacting with her child described the footage as showing “he was harmed … physically, emotionally, and mentally harmed.” The parent outlined what she had seen in the footage to Military.com but requested anonymity and that the publication withhold specific details of the tape to protect her identity due to concerns about retaliation.

It took a month and a half after the incident that was caught on tape for the parents to find out about what had happened. Moore asserted that this delay was because “it took over two weeks to review that video in its entirety” — a process that began Oct. 19 “as part of normal standard operating procedures.”

The Navy also failed to inform its community of parents of an earlier issue with an employee in August. That month, a staff member at the center resigned after being accused of child abuse. Moore claimed that the incident kicked off an investigation with the Naval Criminal Investigative Service, but in later emails with Military.com also noted that it did not lead to a closure or additional training for staff, although some classrooms in the center would close for “COVID-19 mitigation” around the time of the resignation.

When the center was shut down for just under a week in mid-October, the service cited a need “to conduct a mandatory training and sanitation stand down for our staff” as the reason for the closure, according to a copy of an email sent to parents that was provided to Military.com by the Navy. Moore said that “no incidents of child maltreatment were found during this time.”

Moore confirmed that the center reopened Oct. 25 and a message to parents went out the next day. That message, again shared by the Navy, noted that child safety was a top priority but made no mention of what prompted the closure or the ongoing video review.

Rumors began to swirl. In a China Lake families Facebook group, parents wondered whether the closure was over mold, staff shortages or inspection failures, according to posts reviewed by Military.com. Many parents were frustrated over the lack of communication and information.

After the child care center reopened, several teachers were missing.

Moore said that a “leadership change occurring in Oct. 2022 prompted a review of all policies, procedures and their implementation” at the center. “From this review, a three-day safety stand down closure was executed” and the center was shuttered until Oct. 25, she said.

On Nov. 4, more than a week after the reopening, the parent who described harm to her child received a call from the center’s leadership telling her that they wanted to meet in person, she said. At that meeting, she was told that, after officials reviewed camera footage from the center, they found that “there was mishandling of your child.”

“She did allude to that it was not sexual in nature but she wouldn’t give any information as regards to if he was pushed or shoved or shaken,” the parent said. Moore, the Navy spokeswoman, said the violations did not include sexual contact.

When the parents finally saw the footage on Wednesday, they were startled to learn that their son’s “mishandling” actually happened more than six weeks prior, on Sept. 23.

“When you use the words ‘mishandling,’ it’s like a carton of eggs. … I dropped the box and mishandled it,” the parent said, indignant at the Navy’s choice of words. “These are children.

“I’m still pretty adamant that he is referred to as a victim,” she added.

The Navy’s review of video footage has “revealed that three employees violated the Navy child and youth programs guidance and touch policy,” according to Moore, but she didn’t provide the number of victims impacted by the violations.

Moore would not directly say what investigations are ongoing at this time or by what agency, but she did note that “cases where a suspicion that the policy violations also meet the criteria of institutional abuse were reported to Commander, Navy Installations Command; the Family Advocacy Program; and Child Protective Services per the mandatory reporting process.”

The latest letter from the Navy to parents, dated Nov. 9, was from the base’s commanding officer. It told them that “staffing changes drove most of the reasons for the shutdown” and said “ongoing investigations or administrative actions” prevent him from going into more detail.

It included much of the same language about “video footage related to potential policy violations” that Moore provided to Military.com on Wednesday.