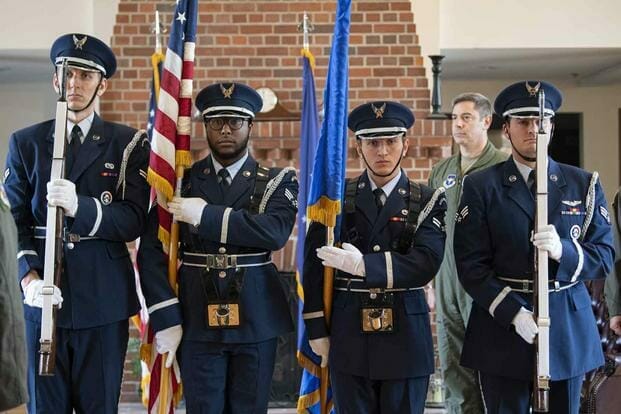 The Air Force Honor Guard, the outward facing group of service members whose mission is to represent the ideal airmen to the American public, has started allowing those with shaving waivers to sport beards.

This past April, the Honor Guard changed its policy to begin allowing those with shaving waivers for medical and religious reasons to apply and join, reversing a long-standing clean-shaven standard. Since the policy took effect, 21 out of the total 271 airmen have a pass to grow beards, according to the 11th Wing at Joint Base Anacostia-Bolling in Washington, D.C.

“Removing the shaving waiver barrier allows a larger pool of eligible members to join the ranks of ceremonial guardsmen,” Col. Catherine “Cat” Logan, commander of Joint Base Anacostia-Bolling and the USAF 11th Wing, told Military.com in an emailed statement Monday. “Currently, 21 ceremonial guardsmen in the United States Air Force Honor Guard serve with shaving waivers. These guardsmen trim their facial hair to present a neat, clean, professional image on behalf of all Airmen.”

A Dec. 2 memo, posted to social media but authenticated by 11th Wing spokeswoman Anastazia Clouting, detailed what is expected of airmen with shaving waivers.

Airmen “will lightly shape their beard, shaving any stray hairs which fall outside the beard’s distinct outline to present a neat and professional image,” the memo explains.

While airmen are allowed to have beards while performing Air Force ceremonies and duties, if they’re a part of a joint service honor guard with another branch, they will be required to shave even if they have a waiver.

“Airmen will be asked to shave their beards to participate in joint service ceremonies,” the memo details.

In joint service duties, the strictest policies are typically the ones that prevail as the standard for all branches involved.

Beards have become a hot topic in the Department of the Air Force, as well as the military at large. Some service members get frequent ingrown hairs and skin irritations known as pseudofolliculitis barbae, or PFB. The condition is often found in curly-haired men and occurs in about 60% of African American men, according to studies by the American Osteopathic College of Dermatology.

African American service members have reported that obtaining a shaving waiver has harmed their careers.

Joining the Honor Guard is a voluntary special duty role. Katherine L. Kuzminski, a senior fellow at the Center for a New American Security think tank who researches military culture, told Military.com on Tuesday that roles like that often look good when an airman is up for a promotion or high-level assignment.

And while Kuzminski said the policy is a needed step, it’s not clear how it will play out in practice for positively affecting an airman’s career.

“There can be a gap between policy and culture, so the fact that the policy has changed is a good first step,” Kuzminski told Military.com in an interview. “But the second part, the cultural piece, is more impactful when it comes to future promotions or assignments to higher grades. It opens the door, but it also comes down to how a shaving waiver is perceived.”

In August, Military.com reported that the Department of the Air Force was discussing a pilot program that would allow airmen and Guardians to grow beards.

Kuzminski said it makes the Air Force and Space Force the first branches to look at a facial hair pilot program not tied to a religious or medical waiver, which would help normalize facial hair among the ranks.

Emails and messages leaked online regarding the Department of the Air Force’s pilot program said selected airmen and Guardians would be allowed to grow facial hair as long as it’s “neat in appearance, shaped appropriately, and not faddish.” Those in the program would limit growth to one-quarter of an inch.

A large number of Guardians, like service members from other branches, are advocating online for beards, given the nature of their assignments.

“We shouldn’t build a culture limited by the past,” Natale wrote. “Let’s look to the future. Do not fear the beard; resistance is futile.”

Other services, such as the Navy, have also tried to make beards more prevalent among the ranks.

The Navy announced a new policy in March stating that sailors diagnosed with PFB would not be kicked for not shaving, and would be allowed to edge and outline their beards instead of being forced to grow them out.