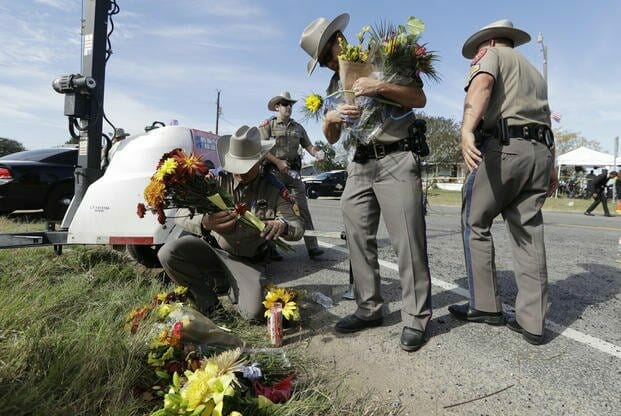 Dozens of gun-control advocacy groups claim the Biden administration’s appeal of a court ruling that found the Air Force partly responsible for a 2017 mass shooting in a Texas church is hurting victims’ families.

The 37 groups penned a letter to the Justice Department on Oct. 6 urging it to abandon the legal challenge after a federal judge earlier this year ordered the service to pay more than $230 million to the survivors and families of the 26 people killed and injured by an Air Force veteran in the mass shooting.

A judgment issued last year found the Air Force 60% responsible for the events because the service failed to report the gunman’s criminal history to authorities, which would have stopped him from buying the firearm he used to gun down the parishioners at the First Baptist Church in Sutherland Springs.

Read Next: Senior Leaders Should Stay Out of ‘Culture Wars’ on Social Media, Army Secretary Says

“The families of the 26 people who were killed and the 22 more who were wounded have spent almost five years fighting for justice, a process that has been retraumatizing, painful, and needlessly protracted,” the letter to Attorney General Merrick Garland says. It was signed by groups such as Brady United Against Gun Violence, March for Our Lives and Women Against Gun Violence.

“Please allow these victims to finally close this horrific chapter of their lives and move forward. Please make this country a safer place. Please withdraw your appeal. Please deliver justice,” the letter continues.

The Justice Department filed an appeal this summer to overturn the judgment.

The ruling against the military explained that the shooter, Devin P. Kelley, was not flagged in the National Instant Criminal Background Check System, or NICS, after he made threats of violence to his Air Force superiors, assaulted his wife and child, attempted to smuggle firearms onto Holloman Air Force Base in New Mexico, and escaped from a behavioral health facility while awaiting court-martial in 2012. He received a bad conduct discharge from the service in 2014.

Military.com spoke with one of the victims’ parents, Chancie McMahan, this past June. McMahan is the mother of Ryland Ward, who was severely wounded during the shooting.

Ward, who was five years old at the time of the massacre, suffered four gunshot wounds, with one causing severe blood loss. Among other severe injuries, his femur was fractured in several places, an injury that required extensive surgery.

“Even after extensive physical therapy, [Ward] cannot make full use of his left arm or leg,” the earlier ruling against the Air Force said, “because the injuries to his hip and femur destroyed his growth plate, [Ward’s] leg will not grow from the hip.”

The judge in the trial, Judge Xavier Rodriguez, wrote in the July 2021 ruling that found the Air Force partial responsible, “Had the government done its job and properly reported [the shooter’s] information into the background check system — it is more likely than not that [the shooter] would have been deterred from carrying out the church shooting.”

Shortly after the shooting, the Air Force also acknowledged that “had his information been in the database, it should have prevented gun sales” to Kelley.

The Department of Justice did not immediately respond Monday to a phone call and an email requesting comment.

After the 2017 shooting, Air Force officials claimed they would make immediate reforms.

That year, a Pentagon inspector general’s report found that all military services “consistently” failed to submit fingerprint data for 24% of the convicted offenders reviewed. Notably, one of the Air Force’s law enforcement offices failed to report 60% of the fingerprint and final disposition reports for convicts, the review detailed.

Then-Air Force Secretary Heather Wilson told Washington officials in 2017 that local offices were now required to loop in higher levels of command before closing criminal cases and that officers must verify that the records have been added to the FBI’s database. In 2019, the Air Force acquired a new program for crime reporting that replaced an outdated computer system that had been around since the 1990s.

It is not clear whether the Justice Department’s appeal is aimed at reducing the compensation or disputing the government’s overall culpability.

“The government must accept responsibility for its failures that enabled the Sutherland Springs gunman to erroneously pass a background check and obtain the murder weapon. … The undersigned respectfully request that you withdraw your appeal. As the court determined, the government’s actions and inactions caused many to die, and many more to be injured. The entire community continues to suffer irreparable trauma,” the letter from the advocacy groups says.

— Drew F. Lawrence and Konstantin Toropin contributed to this report