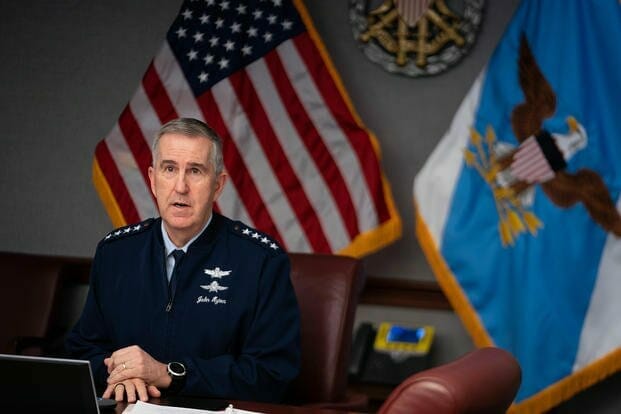 The ruling not only allows a lawsuit that seeks thousands of dollars in damages from a man who was once one of the highest-ranking officers in the military, it could also smooth the way for future, similar lawsuits.

The core of the argument put forward by Department of Justice lawyers was that Spletstoser was unable to sue Hyten — the former vice chair of the Joint Chiefs of Staff — because he was protected by a long-standing legal principle known as the Feres Doctrine.

Read Next: In the Army, You’re More Likely to Be Detained for Drugs Than Sexual Assault

The Feres Doctrine prevents service members from suing the government over injuries suffered as a result of their military service. It has most often been used to limit medical malpractice suits.

Applied in this case, it meant that the government was effectively arguing that Spletstoser’s sexual assault was an inherent part of military service and, as a result, civilian courts were not empowered to intervene. Lawyers for the government told the judges at the 9th Circuit Court of Appeals that “Feres required the district court to decline [Spletstoser’s] invitation to second-guess the military’s disciplinary investigation and conclusion.”

The appeals court, however, sided with original district court ruling and remarked that they “‘cannot fathom’ how the alleged sexual assault in this case could ever be considered an activity ‘incident to [military] service.'”

“It is just common sense, and it’s good to see a court use common sense to say sexual assault is not incident to service,” Christensen said in a phone interview with Military.com. “It’s a huge day for survivors.”

While he did not have a total number of cases off the top of his head, Christensen said the Feres Doctrine has “definitely” been used in other sexual assault cases before.

The ruling should now be precedent for other cases within the 9th Circuit’s jurisdiction and is “so solid,” it could be “persuasive” in other circuits too, he said. But to become the law of the land, the Supreme Court would have to rule on the case. Christensen said he expects that the Justice Department will appeal to the Supreme Court, but that he could also see the government being worried about setting precedent for the entire country.

Military.com contacted the Department of Justice but did not receive a comment in time for publication.

Spletstoser first went public with allegations against Hyten after he was nominated to be vice chairman of the Joint Chiefs in 2019.

Spletstoser, first to Air Force and congressional investigators and then in a lawsuit filed in November 2019, alleged there were multiple instances of unwanted kissing, hugging and rubbing up against her while she served under Hyten at U.S. Strategic Command in 2017. In one incident described by Spletstoser, Hyten allegedly visited Spletstoser in her hotel room while they were at a conference in California and pressed up against her while kissing her, then ejaculated on her.

Hyten has flatly denied the allegations, telling lawmakers during his confirmation hearing that “these allegations are false” and “nothing happened, ever.”

An Air Force investigation did not find corroborating evidence to charge Hyten. Following the investigation, the Senate ultimately confirmed him as vice chairman.

A couple of months after Hyten’s confirmation, Spletstoser filed the civil lawsuit, which has been working its way through the legal system ever since. In fall 2020, Hyten and the government tried to get the case dismissed for lack of jurisdiction or have it transferred to Nebraska — the state where both were stationed at the time of the alleged assault. Neither move was successful, leading to the appeal.

“Some courts are way too quick to punt on critical rulings by saying, ‘Well, you know, this is a military issue. We’re not qualified to address it,'” he said. “Which is great if you’re talking about plans to invade a country or training, but it’s nonsensical when it comes to issues like sexual assault.”

In its opinion, released Thursday, the appeals court noted that the Feres Doctrine was far from absolute and, in fact, required that several details of Spletstoser’s allegations be factored into their decision to rule in her favor.

The court noted that “the off-base location weighs against application of the Feres doctrine” and that “Spletstoser, preparing for bed in her private hotel room, ‘was in the same position as any civilian would have been at the time.'” Both reference the 2017 incident in the California hotel room while both officers were attending a conference.

“One would be hard pressed to conclude that a tortious sexual assault is in any way incident to ‘a decision requiring military expertise or judgment,'” the court noted.

“Frankly, it would be a highly unusual circumstance when a sexual assault consisting of the facts alleged by Spletstoser would further any conceivable military purpose, and thus be considered incident to military service.”

Both Spletstoser and Hyten have since retired from the military. Hyten declined to pursue a second term as vice chairman of the Joint Chiefs just weeks after the district court declined to drop the lawsuit.

Related: What a General’s Court-Martial Means for the Military’s ‘Old Boys’ Club’