The New B-21 Stealth Bomber to Be Revealed Later This Year, Senator Says 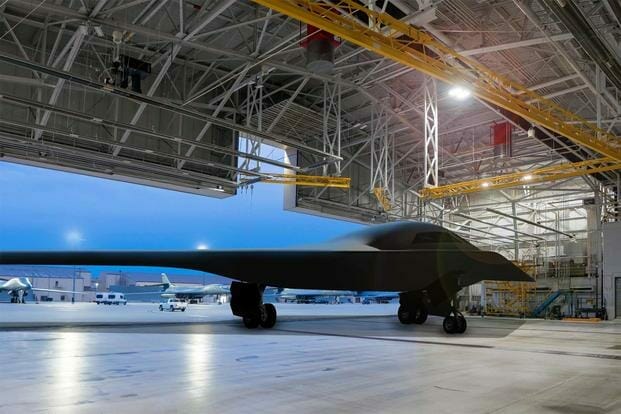 Sen. Mike Rounds, R-S.D., said the B-21 Raider stealth bomber will finally be revealed to the public later this year, unveiling an aircraft that has been shrouded in secrecy since the program began in 2014.

Rounds, the only elected official in a classified visit July 15 to the B-21 Raider production facility in Palmdale, California, said the project is also on track for a first flight in 2023.

“While much of the information I received on my visit is classified, I am pleased to report the B-21 is on time and on budget,” Rounds said in a Tuesday press release from his office. “The public can expect the B-21 to be revealed later this year.”

To date, the public has seen only realistic artist renderings of the next-generation stealth bomber, but a spokesman for Rounds’ said an image of the B-21 itself should be coming soon.

Last year, the U.S. Air Force released a rendering of the B-21, showing the long-range stealth bomber taking off from Edwards Air Force Base, California, where it will someday be tested before taking on worldwide operations.

Ellsworth Air Force Base, just outside of Rapid City, South Dakota, was selected last summer as the first installation to receive the aircraft.

“The B-21 is one of the most advanced aircraft to ever be developed,” Rounds said. “We are getting closer to bringing this state-of-the-art platform home to Ellsworth Air Force Base.”

The B-21 is being manufactured by Virginia-based Northrop Grumman. Budget documents show that producing the B-21 will cost around $20 billion through 2027.

Sen. John Thune, R-S.D., spoke on the floor of the Senate on Wednesday, saying he’s aware that six B-21s are being developed and stressing the need for Congress to pass the annual defense spending bill because it also includes construction projects for Ellsworth to support the aircraft’s mission.

The South Dakota Republican is pushing for more resources, overall, to accommodate an influx of service members who will come to the area along with the new B-21.

“I worked to include in this year’s NDAA an extension of an authority for the secretary of defense to adjust Basic Allowance for Housing rates if an installation is experiencing a sudden increase in the number of service members assigned there,” Thune said. “This will help ensure that families at Ellsworth and elsewhere will have the resources they need to secure appropriate accommodations.”

Thune added that “as many as 250 people per year, including 100 dependents” could be moving to the Rapid City area to support the B-21.

Related: Air Force Releases a New Peek at the Stealthy B-21 Raider