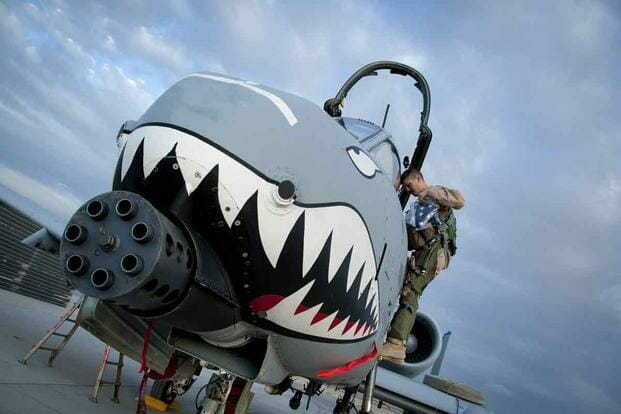 Air Force officials said last week that a variety of American planes could be given to Ukrainian pilots in their fight against Russia, including the A-10 Warthog. But in a message to Military.com on Tuesday, Yuriy Sak — an adviser to Ukraine’s minister of defense — made it clear: The country doesn’t need A-10s, it needs the more modern F-16 Fighting Falcon fighter jet.

The A-10s “will not close our sky, they will not stop bombers and missiles,” Sak said in a message. “They will be a target for Russian jet fighters and anti-aircraft defense, because we don’t have the means neither to effectively cover them, nor to break through the enemy anti-aircraft defence.”

U.S. military officials and the Ukrainian Ministry of Defence are in ongoing talks about which modern aircraft would best help the country repel invading Russian forces and also help build its air force for future protection against adversaries.

Air Force Secretary Frank Kendall was asked last week at the Aspen Security Forum in Colorado whether the A-10 — which the service has been slowly retiring from its fleet, while encountering congressional resistance — could be given to Ukraine.

“That’s largely up to Ukraine,” Kendall said in response. “Older U.S. systems are a possibility. … We will be open to discussions with them about what their requirements are and how we might be able to satisfy them.”

Though the 1970s-era A-10 has become beloved by troops for its ability to deliver ample munitions and endure extensive damage while still making it home, officials have been pushing to retire it to free up budget space for the F-35A Lightning II.

Sak didn’t deny the A-10’s strengths, but he believes it misses the mark for what Ukraine wants right now.

“The A-10 can destroy ground targets very well, maybe better than anyone else. But, other aircraft offer Ukraine so much more,” Sak said in a message. “At the same time, the A-10 will divert the lion’s share of financial and human resources from the issue of re-armament to a modern multifunctional FIGHTER (F-16, etc.), which would be a strategic mistake.”

He compared the A-10 in combat to the Su-25, a Soviet-era jet in current use by the country’s air force.

While the A-10 has more modern, high-precision weapons, Sak believes it is still at the same tactical disadvantage as the Su-25.

“When using conventional unguided missiles and bombs, the A-10 is practically the same easy target for russian air defense as the Su-25,” Sak said.

Air Force Chief of Staff Gen. Charles Q. Brown Jr. told attendees at the Aspen Security Forum earlier this month that there is discussion of training Ukrainian pilots on American systems, as well as the Eurofighter Typhoon and the French Dassault Rafale jet.

But the notion of reusing America’s A-10s, a big airframe with a 57 foot, 6-inch wingspan and known for the signature “brrrttt” noise emitted from its 30mm Gatling-style guns, captured a lot of attention.

The A-10 was discussed as a possibility for Ukrainian forces as the invasion began five months ago when Russian convoys began making their way across the border after seeing extensive use in Iraq and Afghanistan, providing close-air support for troops.

Ukraine has not been shy about asking for U.S. fighter jets. In March, the country’s air force tweeted about wanting F-15 Eagle and F-16 Fighting Falcon fighter jets and claimed its pilots “can learn to fly these with just 2-3 weeks of training.”

Defense experts say it would take significantly longer than that, which was one reason there was an initial push to send Russian-made jets since Ukrainian pilots were already trained on the aircraft. Those plans fell apart over how the aircraft could be delivered without making NATO airfields potential targets.

Another issue is getting American contractors to assist with parts and maintenance on the ground in Ukraine. But Sak said the F-16 is already used by a wide variety of allies close to Ukraine, and they could lean on those partnerships.

“Plus, for sustainability … almost every regional partner of Ukraine is flying F-16s,” Sak said. “Think about the assistance Ukraine receives on MiG-29 parts. Now, replace the MiG-29 with the F-16. … It’s an easy decision.”

House lawmakers recently approved $100 million as part of the 2023 National Defense Authorization Act to train Ukrainian pilots to fly U.S. fighter jets as the campaign against Russia rolls into a fifth month.

While it’s not clear what airframe U.S. officials will settle on, the Ukrainian air force’s calls for F-16s have continued.

“The Minister of Defense of Ukraine Oleksiy Reznikov stated that we have a chance that the Ukrainian pilots will start mastering the modern generation of aircraft,” the Ukrainian air force tweeted Monday. “It could be F-16s, but we need to prepare the airfields for that. And Ukraine can do it.”