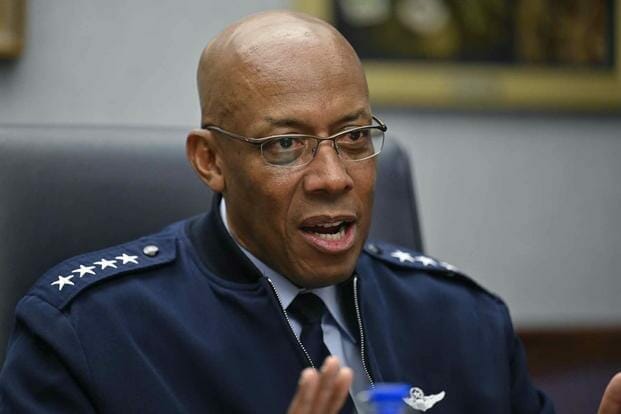 Gen. Charles Q. Brown Jr., chief of staff of the Air Force, said that U.S. officials are considering training Ukrainian pilots as that country continues to fend off Russia’s invasion.

Brown’s comments at the Aspen Security Forum in Colorado on Wednesday come as House lawmakers recently approved $100 million as part of the 2023 National Defense Authorization Act to train Ukrainian pilots to fly U.S. fighter jets as the campaign against Russia rolls into a fifth month.

“I do believe that we have an aspect and a responsibility, like we do with all our allies and partners, to be prepared to train them in various capabilities and capacities,” Brown said. “Part of this is understanding where Ukraine wants to go, and how we meet them where they are.”

Brown told Reuters during his flight to Aspen that allies and the U.S. are discussing Ukraine’s “long-term plan on how do you build their air force and the air force that they’re going to need for the future?”

Gen. Mark Milley, chairman of the Joint Chiefs, also spoke about the possibility of training Ukrainian pilots during a press conference at the Pentagon on Wednesday, but did not confirm any details.

“On the flight training, as you know, we look at all kinds of options to present [to] the secretary [of defense] and the president, and there’s been no decisions on any of that,” Milley said. “But we do examine a wide variety of options to improve pilot training.”

Ukraine has not been shy about asking for U.S. fighter jets in its war against Russia. In March, the country’s air force tweeted about wanting F-15 Eagle and F-16 Fighting Falcon fighter jets and claimed its pilots “can learn to fly these with just 2-3 weeks of training.”

Defense experts have previously told Military.com that it would take significantly longer than a couple of weeks to successfully train Ukrainian pilots to fly U.S. jets.

Earlier conversations this year between Poland and the U.S. focused on supplying Ukraine with Russian MiG-29 jets because Ukrainian pilots are already trained on flying that aircraft, but the talks broke down over the complexities of delivering the aircraft amid concerns that NATO air bases could be deemed targets if the planes were allowed to fly into Ukraine from those runways.

Brown didn’t say which aircraft the Ukrainians could be training on or flying in the future, pointing to U.S. planes, the Eurofighter Typhoon and the French Dassault Rafale jets as possibilities.

He did add that it was unlikely the Ukrainians will be using Russian MiGs.

“There’s a number of different platforms that could go to Ukraine,” Brown said. “Probably not MiGs. I think it’ll be tougher to get parts in the future from the Russians, so it’ll be something non-Russian — I could probably tell you that.”

Ukrainian President Volodymyr Zelenskyy’s wife, first lady Olena Zelenska, appeared in-person in front of U.S. lawmakers Wednesday where she thanked them for the billions of dollars in aid and military equipment sent to her country, but also asked for more air defense systems.

“We want no more airstrikes. No more missile strikes,” Zelenska told congressional members. “Is this too much to ask for?”

The U.S. has been providing the High Mobility Artillery Rocket System, or HIMARS, to the Ukrainians. It has a range of about 50 miles and allows strikes deep into Russian-held territory.

Defense Secretary Lloyd Austin said Wednesday, speaking alongside Milley, that the U.S. plans to announce another shipment of four more HIMARS this week, on top of 12 already delivered, as well as rockets. The American aid has also included Javelin anti-tank missiles, Stinger anti-aircraft missiles and howitzers.

Austin and Milley, who spoke Wednesday with officials from more than 50 nations supporting Ukraine’s war effort, have pointed to the HIMARS as a key weapons system giving Kyiv a fighting chance on the battlefield in the Donbas region, where it has been locked in bloody conflict for months.

“Today, the Ukrainians are effectively employing these HIMARS strikes against Russian command-and-control nodes, their logistical networks, their field artillery and air defense sites, and many other targets,” Milley said. “These strikes are steadily degrading the Russian ability to supply their troops, command and control their forces, and carry out their illegal war of aggression.”

Milley described the fighting in eastern Ukraine as a “grinding war of attrition” with tens of thousands of artillery rounds being fired each day, resulting in a high number of casualties and little progress by either side.

“In terms of actual ground gained, [there’s been] very, very little by the Russians, relative to all of Ukraine,” he said.