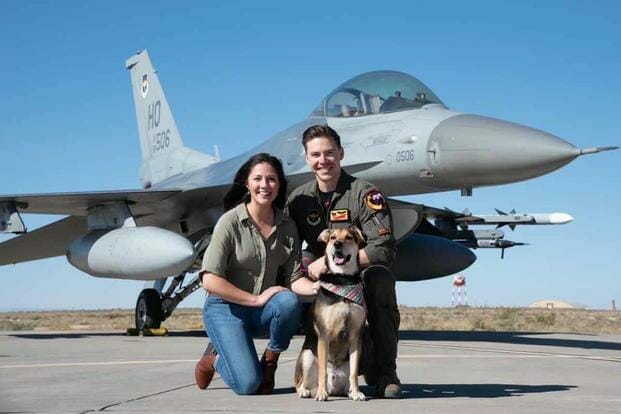 Valerie Schmitz was used to her husband, David, training late at night as an F-16 Fighting Falcon pilot at Shaw Air Force Base in South Carolina.

But she didn’t understand why, around midnight on July 1, 2020, he chose to ring the doorbell, riling up their dog — Toby — instead of just using his key to come in. When she opened the door, David wasn’t there.

“I opened the door and in front of me I see members of his squadron and a chaplain,” she wrote in a public Facebook post in 2020. “My heart sank to my stomach. The looks on their faces said it all. I was informed that there was an accident and unfortunately Dave did not make it.”

Read Next: Abortion Bans Will Affect 80,000 Female Troops and May Push More Out of the Military, Rand Says

Now, two years later, the 32-year-old has filed a federal civil lawsuit against defense giant Lockheed Martin, Collins Aerospace and several sections of Teledyne Technologies, alleging that components of her husband’s ejection seat may have been counterfeit, leading to his death on June 30, 2020.

In the months after his death, the Air Force’s Accident Investigation Board said the pilot clipped an antenna during a landing attempt and damaged his landing gear. He attempted a cable arrest but had to eject after his left wing hit the runway.

The Air Force board also said his ejector seat malfunctioned, and he died instantly upon impact.

According to new information in an amended complaint filed in U.S. District Court in South Carolina on Aug. 30, the Air Force’s Research Laboratory examined components in the seat and believed some of them were suspect.

Normally, when an ejector seat exits an aircraft, the DRS activates.

Schmitz had less than four seconds after initiating ejection to pull the emergency manual parachute deployment handle once he realized the first hadn’t worked.

The South Carolina-based Motley Rice law firm’s aviation attorney James Brauchle is representing Schmitz’s wife, Valerie. He said the Air Force has not been forthcoming with her about the details of the case and she hadn’t learned of the questionable parts until requesting the Air Force Aircraft Investigation Board’s findings.

Department of the Air Force spokeswoman Rose Riley told Military.com that the service does not comment on pending litigation.

Emails and phone calls requesting comment from Collins Aerospace and Teledyne Technologies were not immediately returned.

Lockheed Martin spokeswoman Leslie Farmer said in an email, “It is our practice not to comment on pending litigation.”

The defendants will be required to file a rebuttal by the end of the month.

An extensive two-part investigation from Military.com last year examined Schmitz’s death and raised notable concerns about the serious impacts of limited flight hours and insufficient training due to limited available aircraft and the demands of real-life missions.

Military.com’s series also pointed out that there was an opportunity for the ejection seat to be examined and flawed parts to be detected in 2017, three years before the incident, but it didn’t happen because of a lack of available parts.

Valerie Schmitz’s legal team is blaming the contractors for wrongful death, accident liability, negligent supervision and failure to warn about the issue and is seeking a jury trial as well as financial damages.

Related: The Air Force Knew It Had an Ejection Seat Problem, But Didn’t Speed Up a Fix. Then a Pilot Died