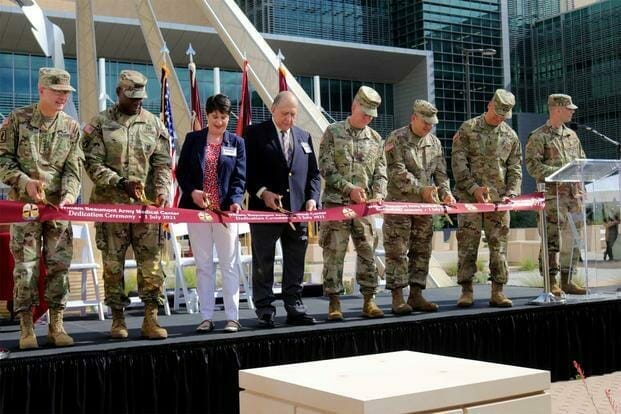 Water restrictions have continued this week at the William Beaumont Army Medical Center at Fort Bliss, Texas, just nine months after the facility opened its doors.

As of Wednesday, hospital employees and patients were able to use the water for handwashing and showering, but restrictions continued on its use for drinking or medical needs such has sterilization and surgery after sediment and discoloration was found throughout the facility last week.

Employees noticed there was debris in the water in one department on March 25, according to a base press release. Officials thought the problem was limited to that section, but hospital-wide testing found the sediment elsewhere.

Hospital leaders declared the water unsafe to drink out of “an abundance of caution” on April 7.

They noted, however, that the installation’s environmental health team found no “pathogenic or environmental concerns,” and also determined, via testing, that the problem did not stem from the water supply, which is drawn from the city of El Paso.

“Hospital officials suspect the root cause … lies within the hospital’s internal plumbing,” they wrote in a press release.

A replacement for an aging medical center 10 miles away, the hospital was scheduled to open in 2017 at a cost of $740.4 million. The opening was pushed to September 2020 and again to this year as a result of the pandemic, with the cost exceeding $1.3 billion.

The seven-story complex serves thousands of patients with 30 specialty clinics, 10 operating rooms and an emergency department and trauma center.

A Fort Bliss spokesperson told Military.com that water test results are expected Thursday. In the meantime, the installation has brought in stand-alone eye-washing facilities and “exterior water storage solutions.”

It flushed the pipes last week and shut off the main water line for inspections before allowing limited use over the weekend.

According to officials, experts from U.S. Army Environmental Command, the Defense Health Agency, the Corps of Engineers, Army Installation Management Control and Army Medical Command have responded to the problem.

“We have the right experts on the ground, and everybody’s working around the clock. I am in no way a scientist, but to these folks work, it’s pretty awesome,” said Lt. Col. Allie Scott, the spokesperson.

As a result of the issues, the hospital is sending new trauma patients to local facilities and has postponed all elective surgeries. Equipment sterilization is being conducted in various locations off-site, according to Scott.

No patients have been moved from the hospital, she added.

The U.S. Army Corps of Engineers managed the project, which was designed by HDR Inc., a Nebraska-based architectural firm, and built by Clark McCarthy Healthcare Partners II, a joint venture between Clark Construction in Bethesda, Maryland, and McCarthy Building Companies in St. Louis.

The Corps of Engineers also is managing construction of a replacement for Landstuhl Regional Medical Center in Germany. The Defense Health Agency announced earlier this year that it had awarded a $969 million contract to joint partners Züblin, a Stuttgart-based company, and Gilbane Building Company, which constructed Fort Belvoir Community Hospital in Virginia.

That facility is expected to open in late 2027.

The water issues appear to be confined to the William Beaumont Army Medical Center campus and do not affect any base housing or work spaces other than the hospital facilities.

“WBAMC and Fort Bliss place the safety of patients and the hospital staff first. Technical experts continue to troubleshoot systems and develop both near and long-term solutions,” Fort Bliss officials said in a press release.

In November, residents of U.S. Navy housing in Honolulu reported fuel contamination in their tap water leading to the displacement of thousands of families from their homes for more than three months. The fuel spill that caused the contamination and subsequent investigation led the Navy to shut down the largest Defense Department fuel depot in the Pacific Region.

William Beaumont officials advised any Tricare beneficiaries who have health concerns about the facility’s water to contact their primary care provider; call the Tricare Nurse Advice Line, 1-800-874-2273; or go to an urgent care clinic in El Paso.