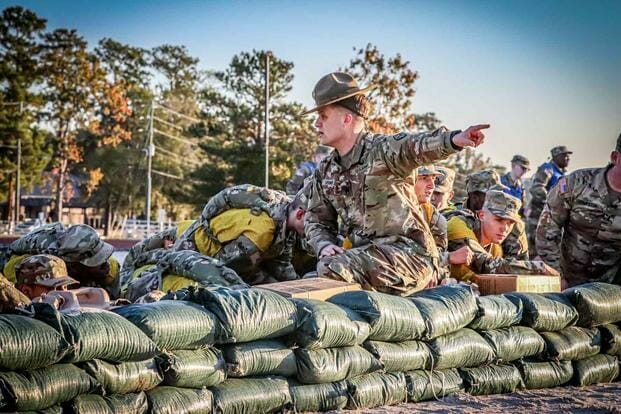 The Army is putting the finishing touches on a new ribbon to be awarded to soldiers who help convince someone to join the service, three sources with direct knowledge of the plans told Military.com.

It’s unclear when the medal will start to be awarded. Army officials and recruiters interviewed by Military.com say there is no silver bullet to the recruiting slump the service saw last year, when it came up 15,000 active-duty soldiers short of its goal of bringing in 60,000 new recruits. The Army National Guard is in even deeper trouble.

Despite failing to hit its target last year, the Army has increased its goal this year, with senior leaders aiming to recruit 65,000 new full-time soldiers while scrambling to come up with new strategies to boost numbers.

Read Next: More Than a Dozen Special Operations Soldiers at Center of Drug Trafficking Probe

Right now, the service doesn’t have any easy answers on how it can change the recent trajectory and attract new recruits. The upcoming medal is part of a broader initiative to get current soldiers to “tell the Army story,” a talking point often repeated by senior leaders in the hopes that the current rank and file showing off the positive elements of service to friends and family could push applicants into recruiting offices.

The Army has also been emphasizing its streaming advertising to reach a younger demographic. Last year, the service spent at least $104 million on advertising, half of that going to digital advertising on platforms like YouTube, Hulu and Peacock, as well as audio streaming such as Spotify, according to internal service data reviewed by Military.com. In the same year, roughly $25 million was spent on online search, such as Google ads. Traditional TV, including Adult Swim, A&E and BET, saw about $16.6 million in ad buys. Social media is where the Army spent the least amount of money, with slightly more than $8 million.

The Army is set to launch a new ad campaign in March, bringing back the classic “Be All You Can Be” slogan, but the new ads will ditch the old jingle heard in commercials in the 1990s. The focus of that campaign will be trying to convince Gen Z that military service doesn’t hold them back in life — the idea being someone could potentially serve a short period of time and get out with benefits like the GI Bill and a generous home loan or have a career for life.

“Service in the Army is not actually a limiter, it’s not going to hold you back from your hopes, dreams, plans,” Col. John Horning, director of marketing strategy for the Army Enterprise Marketing Office, told Military.com in an interview. “[Service] may, in fact, for many people, put hopes, dreams and plans on a little nitrous boost. Once you’re out, you’re out. But, you know, whether it’s a single term, that’s not really all that long, considering the developmental opportunity to get in there. And then what you take into your career choices afterward.”

For Army leadership, the overarching plan comes down to making sure the broader message of an inclusive branch that provides a leg up reaches as many Americans as possible.

“We need to tell the Army’s story in new ways to ensure we remain the first choice for Americans who want to serve their country,” Army Secretary Christine Wormuth said in a statement to the force last year. “We need to reach out to Americans from all backgrounds, talents, and geographies and give them multiple reasons to come in and stay in our great Army. My goal is to help all Americans to be able to see themselves in what the Army has to offer.”

But that message, delivered in February and repeated throughout much of the past year, did not appear to meaningfully combat the Army’s recruiting woes.

Recruiting issues are a culmination of problems including several largely out of the Army’s control — mostly an obesity crisis and low academic performance among young Americans disqualifying them from service. One senior service leader told Military.com that some of the problem is simply attributed to America being in a pseudo peacetime with no war spurring a call to arms.

Army planners are trying just about anything, such as rapidly expanding pre-basic training courses for recruits who are slightly too overweight or who came up short on SAT-style entrance exams to qualify for enlistment. That effort has shown early promise, and senior service leaders including Gen. James McConville, the Army’s top officer, have been cheerleading the program in public and behind the scenes.

The Army has also implemented a handful of new recruiting incentives, most notably allowing recruits to pick their first duty station, within limits — the top pick being Alaska. Last year also saw record-high recruiting bonuses reaching $50,000. But it’s unclear whether those incentives bring any talent to recruiters or if they just sweeten the deal for those already interested in signing up.

The service still needs to find a way to attract new recruits. And Army Recruiting Command, which shoulders much of that responsibility, has been slow to publicize any specific plans. That command got new leadership in October when Maj. Gen. Johnny Davis took over, becoming responsible for some 10,000 recruiters spread across 1,400 locations.

“Last year was tough and we expect this year to be just as challenging, but the Army understands the importance of our mission and is fully behind Recruiting Command,” Davis said in a statement to Military.com. “They’re ALL IN and committed to providing our team with the support needed to tackle this mission. I recently emailed a survey to every person in the command. I received over 44,000 responses from the Soldiers, Recruiters, and civilians. Using this information, I identified a number of areas where I needed to focus my attention: quality of life, talent management, and training. We are listening to our Recruiting Professionals because it is all about the people.”

All of the services are facing the broader demographic headwinds that Army officials have pointed to as greatly complicating their efforts to recruit. The Coast Guard has been struggling with recruiting for years, falling short on its recruiting goals by an average of 20% since 2019.

However, most of the other services have fared comparatively much better. The Air Force hit its recruiting goals last year following a wide range of new bonuses. The Space Force is so small, as it’s in its infancy, that its leadership hasn’t faced any major recruiting challenges as it slowly expands. The Marine Corps barely hit its recruiting target after an uphill battle, but is significantly smaller than most other services.

Like the Army, the Navy is leaning on its current members to bring in new ones, launching a program in late December. The “Every Sailor is a Recruiter” initiative encourages sailors to submit contact information for friends and family who they “believe [are] a good fit for our Navy.”

Sailors are promised a “Flag Letter of Commendation” — not a medal but a letter from an admiral — for every successful contract. The letters are still worth points toward advancement, and sailors are capped at a maximum of two.

The program matches a shift in how leaders in the sea service think about recruitment. Adm. Michael Gilday, the service’s top officer, told an auditorium at the annual Surface Navy Association conference held in Arlington, Virginia, that the Navy is looking to encourage recruits to join by first convincing important people in their life.

Gilday explained that the Navy is looking to get back to advertising on televisions and other legacy media because that’s where “mothers and fathers, aunts and uncles, grandparents, teachers, school administrators” — people who influence young people to enlist — still get their content.

“All of you either are serving or have served,” Gilday said to the auditorium of largely senior and retired officers. “Share that enthusiasm with people; it’s probably more helpful than you think.”

Cmdr. Dave Benham, a spokesperson for Navy Recruiting Command, explained that the sea service sees programs like the sailor recruiting initiative as a way to increase interest in the Navy. Then, other initiatives announced over the past year aim to break down barriers that a recruit would encounter later in the journey.

The Navy’s historically high bonuses, the now-widest enlistment age range, and lowered entrance test standards are an effort to remain competitive against other services, Benham explained.

The service has found in its research of 17- to 24-year-olds — a key recruiting demographic — that “one of the things that clearly comes through is that that generation values organizations that embrace and … not just give lip service to but model, diversity, equity and inclusion,” Benham said. “That goes right into line with Navy core values and our desire to ensure that we’re casting as wide a net as possible.”

Complicating the services’ efforts to market themselves to Gen Z have been the growing limitations on their use of a key platform. TikTok has roughly 50 million to 80 million active users in the U.S., effectively making it the dominant source for news and entertainment for Gen Z.

Yet President Joe Biden banned the popular Chinese app from use on government phones, out of mounting cybersecurity concerns. In recent weeks, roughly two dozen states have followed suit, banning TikTok from government devices. Some senior Army officials who spoke to Military.com on the matter understood the risks of Chinese spying but are also concerned over whether the ban could severely impact the service’s ability to connect with young Americans.

Officials have publicly said that they will find other avenues to reach those same potential recruits.

— Thomas Novelly contributed to this report.

Related: Army Expanding Course for Overweight and Low-Scoring Recruits in Bid to Fill the Ranks