Alaska Gets Rid of Strykers as Brigade Shifts to Air Assault 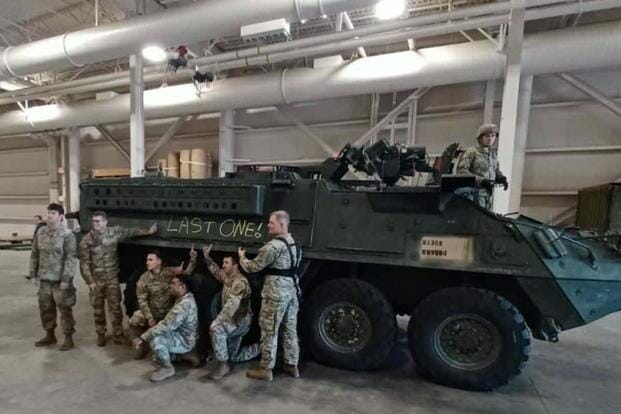 Alaska’s newly formed 11th Airborne Division has shipped away its fleet of roughly 320 Strykers as it shifts its mechanized brigade to focus on air assault. The last vehicles left last week.

Military.com was first to report in June on the decision by Alaska’s Army units to shed their outdated Strykers as part of several steps to better mold and equip soldiers there for Arctic warfare. That move is part of a larger service strategy to shift from the Global War on Terrorism to gearing up for a conventional conflict, where fighting in freezing temperatures could play a major role.

Read Next: Space Force Unveiled Its Official Service Song. It’s Not a Banger.

Strykers were not built to operate in the minus-65 degrees Fahrenheit conditions demanded of military gear in the unforgiving region. Alaska units have frequently struggled with breakdowns, and the wheeled vehicles could not properly navigate snow and ice.

On top of that, many of the Strykers in Alaska were two decades old and saw extensive service in the early days of the Iraq War. Most of the vehicles are expected to be updated and recycled into use in other units across the service.

Shipping away the Strykers was the final major phase in the transformation of the Army’s presence in Alaska. The 1st Stryker Brigade Combat Team, 25th Infantry Division, was redesignated to the 1st Infantry Brigade Combat Team, 11th Airborne Division, in June when the new division was formed. That new formation will focus on air assault operations, while the other half of the division conducts airborne operations.