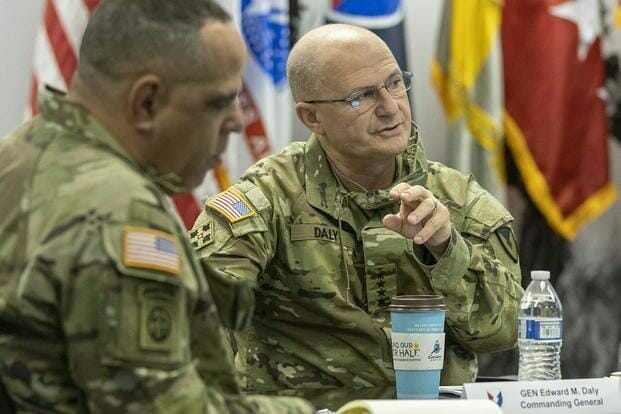 The Army plans to make a radical change next month to how it inspects soldiers’ living quarters after a long history of troops living in moldy barracks.

Gen. Edward Daly, head of Army Materiel Command, which oversees installations, told Military.com in an interview Thursday that the service plans to take the inspection process out of the hands of soldiers who have minimal training and give it to civilian contractors, starting in September.

The Army is also transitioning to a new internal system to better catalog barracks issues, such as mold, to give commanders improved insight on unhealthy and otherwise unsatisfactory living conditions for soldiers. The planned launch of that system has been about three years in the making.

Read Next: The Wolves Leading the Pack: Inside a Key Foreign Unit Fighting to Protect Ukraine

“Smoke Bomb Hill, under the old system, was overlooked. When it was addressed, people weren’t connecting the dots,” Daly said. “They saw isolated [cases] of mold. This is a systemic problem with the barracks.”

In many cases, barracks inspections are done by soldiers as an extra duty. Inspections may be carried out by a private tasked with looking for a long list of issues — such as inventorying fire extinguishers, noting whether any light bulbs need to be replaced, and ensuring that there’s no major damage anywhere.

They are also supposed to alert commanders of major problems such as mold, something the soldiers are rarely trained on how to spot. In some cases, those reports are haphazardly done or blown off altogether.

The news comes as Fort Bragg, North Carolina, officials have begun to move some 1,200 soldiers from the base’s mold-infested Smoke Bomb Hill Barracks in a seemingly unprecedented relocation effort almost guaranteed to stress-test garrison logistics and pour an influx of new renters into a local housing market already bursting at the seams.

“There has been no situation where we have displaced this number [of soldiers],” Daly said.

Of those 1,200 soldiers, roughly 300 sergeants and junior enlisted members are set to be relocated to on-base hotels or private housing on base typically reserved for families or given a housing allowance to live off base, mostly in the surrounding town of Fayetteville, North Carolina.

That number is a moving target, as garrison officials take inventory of how many barracks rooms are available elsewhere on the base and attempt to keep soldiers in the same unit together. An additional 100 soldiers were moved to the noncommissioned officer academy on base.

Roughly 50 rooms in the 12 Smoke Bomb Hill Barracks were discovered to be infested with mold after a complaint from soldiers to Army Secretary Christine Wormuth in early July spurred inspections from Daly and Sergeant Major of the Army Michael Grinston. The problem is mostly the result of leaky mid-20th century air conditioning systems, which are difficult to repair and costly to replace.

Fort Bragg is far from the only installation with moldy facilities. But the Smoke Bomb Hill Barracks were already set to be demolished in roughly five years. The Army decided to accelerate that timeline and now plans to demolish 12 buildings next year, while renovating five others in a $115 million plan.

The barracks were built under the Army’s Project Volunteer Army, or VOLAR, in the early 1970s as the service transitioned to an all-volunteer force. Part of that effort included replacing World War II-era barracks with higher-quality living quarters, giving soldiers more privacy and access to items such as refrigerators. But those VOLAR-era barracks were poorly constructed and have long been a headache for the service.

“If we just evacuated those soldiers [with moldy rooms], in four months we’d have the same problem, given the type of barracks,” Daly said. “Those barracks, we have about 535 in the Army inventory, and they are problematic across the board.”

Officials at Fort Campbell, Kentucky, are in the midst of renovating their own VOLAR barracks, with 17 buildings set to be effectively rebuilt over the next few years. The Army has allocated roughly $10 billion over the next decade to build new barracks and refurbish existing ones across the service.

There are no plans to relocate soldiers at other bases.

“This is about people, quality of life and is tied to retention and recruiting. We’re going to get after these barracks issues over the next several years,” Daly said.

Editor’s note: This article has been updated to correct the cost of the Bragg demolition and renovation project.