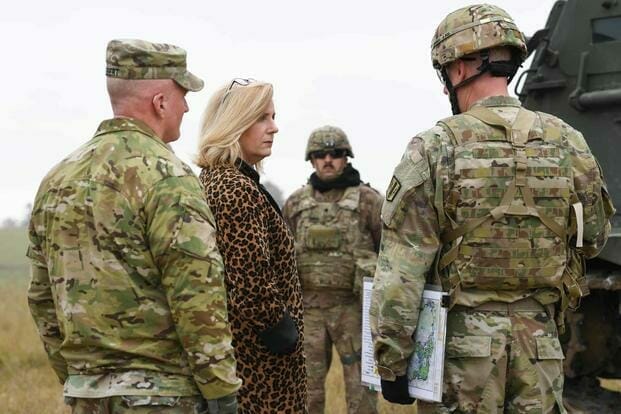 Secretary of the Army Christine Wormuth blamed negative media coverage about the service for exacerbating its recruiting slump, including stories about mental health issues some soldiers face and seemingly rampant sexual assault across the entire military.

“For parents and influencers, there are concerns over psychological harm,” Wormuth, the Army’s top civilian, told soldiers at a conference Tuesday, adding that the coverage of those issues is creating a warped perception of the service. “Parents see headlines about suicides and sexual harassment and assault in the military.”

A July Army memo penned by Wormuth and Army Chief of Staff Gen. James McConville painted a grim picture of the recruiting environment. The two senior leaders projected the size of the total Army to decrease to 452,000 by the end of 2023, a loss of about 14,000 soldiers.

In 2021, the active-duty Army saw 176 suicides, the most in any year since the beginning of the post-9/11 wars, according to the most recent Pentagon data. The Army Reserve had 45 soldiers die by suicide and the Army National Guard lost 101 troops, both of which were comparable to previous years.

Reports of sexual assault across the military services rose 13% in 2021, mostly spurred by a 26% jump in the Army compared to the previous year. However, it’s unclear whether that increase strictly means a spike in attacks or if some of it can be attributed to soldiers becoming more comfortable with reporting. The service is also in the midst of implementing more preventative measures, such as a revamp on how soldiers are taught about assault, moving toward scenario-based training and away from PowerPoint presentations — as well as making new privates go through the courses sooner in basic training.

Wormuth did not directly address the Army’s efforts to combat suicide and sexual assault during her speech.

With the military withdrawing from major wars in the Middle East, in recent years the Army has largely garnered mainstream headlines as a result of scandals in the force such as the 2020 slaying of Spc. Vanessa Guillen, who was bludgeoned to death by another soldier after telling her family she was being sexually harassed. That served as a flashpoint over how the Army investigates sexual harassment, causing reports on the service to be splashed across front pages.

The service has also been seen by some as becoming increasingly politicized in the wake of deployments of National Guard troops to quell protests ignited by police killings of Black men.

In addition, the service frequently makes headlines due to ongoing issues with barracks and family housing being plagued by mold, and garrison leaders being seemingly unable to properly track or combat health hazards their soldiers endure.

Media headlines are far from the only factor making recruiting more difficult. Only an estimated 23% of young Americans are even eligible for service, mostly due to obesity issues and criminal infractions. Officials have also raised concerns about outdated marketing tactics, a lack of a national call to arms with a peacetime military not spurring young Americans to recruiting stations, and a relatively stable civilian labor market.