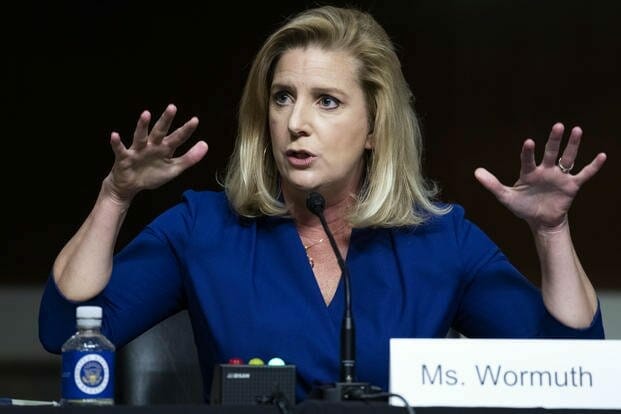 Army Secretary Christine Wormuth on Friday said service leaders need to stand up for women online after previously saying that she expects soldiers to stay out of so-called culture wars to avoid the appearance of partisanship.

“There has been confusion on an issue where there should be none,” Wormuth said on Twitter. “So let me be clear: I expect [Army] leaders to stand up for women–and all Soldiers–who are unduly attacked or disrespected.”

Read Next: Is There Sewage in This Carrier’s Water? The Navy Doesn’t Know.

Her statement comes after a weeklong slog for the service of rebukes from soldiers and media attention on the Army’s handling of an investigation of Maj. Gen. Patrick Donahoe, which found his conduct online to be inappropriate, according to a copy of the report reviewed by Military.com.

The investigation was launched after Donahoe rebutted Fox News’ Tucker Carlson for his criticism of women serving in the military, and amid Donahoe’s public support for other female soldiers on Twitter.

Wormuth’s comments Friday are a pivot from her comments at a press conference Monday during which she said the Army needs “a broad appeal” to attract new recruits and that it’s critical that the Army remain “apolitical and keeping out of the culture wars.”

“We have 185,000 women serving in the United States Army with distinction. I expect leaders to do the right thing by them and every member of our team,” McConville, the service’s top officer said in a statement to Military.com. “Never forget the trust your Soldiers and the American people have in you to do what’s right.”

Senior Army leaders and the service’s public communications apparatus have struggled to walk a tightrope in responding to the inspector general report, with public affairs officials typically barred from discussing such investigations. They also faced widespread criticism from all ranks, blasting the Army for the perception of bending the knee to partisan media and potentially establishing a precedent that could force the service’s leaders to not publicly defend women at a time when they were seeing major gains in terms of acceptance in the Army.

In March 2021, Carlson blasted the service for allowing women to serve, especially while pregnant. That segment served as a flashpoint for right-wing commentators and some Republican lawmakers to launch what has become a steady stream of criticism that the military and its service members are being “woke,” or so fixated on diversity and inclusion that they have abandoned its obligation to warfighting, an allegation for which there is no clear evidence that took hold when President Joe Biden took office.

Donahoe rebuked Carlson, tweeting a video of himself reenlisting a female non-commissioned officer saying that the Fox News host “couldn’t be more wrong” about women in the service.

Army investigators also found Donahoe’s friendly relationship with women online was inappropriate. Donahoe frequently interacted with soldiers on Twitter, including women, and often congratulated them for their military accomplishments or offered words of encouragement, a relatively common practice of Army officials who are routinely online, including Sergeant Major of the Army Michael Grinston. None of Donahoe’s public interactions listed in the report were sexual, and investigators did not suggest there were any concerns of flirtatious behavior; instead, they claim his interactions online could have given the perception of preferential treatment.

“It’s tricky with investigations. Legally sharing information is against protocol, but this story has shifted and the Army has struggled to keep up,” one Army official with direct knowledge of the situation said on the condition of anonymity because they were not authorized to talk to the press on the matter. “There really isn’t a playbook here.”

Military.com interviewed numerous Army officials including civilian staff, senior officers and senior non-commissioned offers on the matter, and most agreed that the situation with Donahoe is a disaster in terms of the perception of the force and that if Donahoe faces any consequences, to include a reduction of rank, the backlash could be enormous.

Army officials have tried to respond to the report in the past week, while keeping it at arm’s reach, never mentioning Donahoe by name or referencing the report on the record. Yet the narrative quickly evolved into the Army throwing women under the bus.

One senior Army officer pointed to Wormuth’s comments on Monday as troubling and said that it could easily be perceived that women existing in the service are inherently political and coming to their defense can be partisan.

Grinston, speaking Wednesday, also pushed back on the idea that officers should not defend their soldiers.

“As a leader you’re expected to intervene on behalf of your soldiers. And then it says in parentheses online and in person. It’s our policy,” Grinston told soldiers at an Army conference in Washington, D.C., referencing the service’s command policy. “We need to intervene, and I’m not going to stop doing that, no matter what the venue is.”

Related: ‘The Army Gave a Hunting Permit to Radical Partisans’: What a General’s Bout with Fox Could Mean for Women