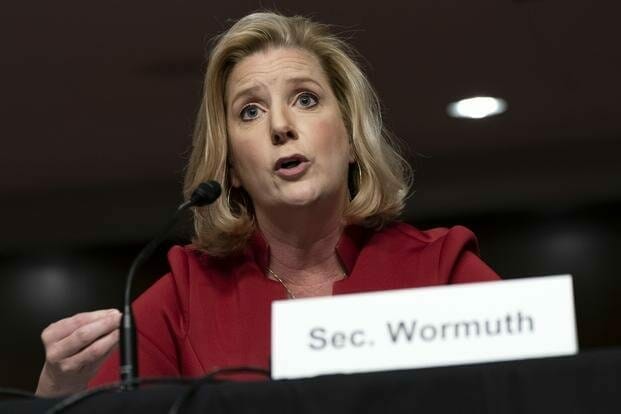 WASHINGTON — The Army plans to increase its investment in marketing and is expected to expand a new program for struggling recruits, but leaders on Monday offered few new details on how they’ll fill the ranks after falling far short of recruiting goals this year.

Army Secretary Christine Wormuth told reporters that a new recruiting task force is coming up with ideas. But any new plans would have to gel quickly in order to reverse the dramatically low enlistment numbers over the past year.

For the fiscal year that ended Sept. 30, the Army enlisted just 75% of its goal — falling 15,000 soldiers short of the 60,000 target. It was the only service to miss its recruiting goal, but all of the others had to dig deep into their pools of delayed entry applicants, which will put them behind as they begin the next recruiting year on Saturday.

Asked if there is any sense the Army will be able to meet its goal this year, Wormuth said it is too early to speculate.

Wormuth and Gen. James McConville, chief of staff of the Army, said that a new program that helps low-performing recruits meet academic and fitness standards is showing promise. But they said there is still no decision on expanding it to three other locations in the country. Wormuth said it will depend on the results over the next month or two.

McConville added: “We want to make sure that there is the amount of recruits that can do that. … The initial results that we’re seeing is this may fundamentally change the way that we do recruiting.”

During a trip to see the program at Fort Jackson, S.C., in August, McConville had said that the program could get set up at three other Army training bases. Commanders had suggested they could put up to 10,000 potential recruits through the classes.

The program provides up to 90 days of academic or fitness instruction to help recruits improve to the point where they can meet military standards.

Wormuth and McConville spoke to reporters on the first day of the annual meeting of the Association of the United States Army.

On other issues, Wormuth said that so far she is comfortable with the amount of ammunition and weapons systems that the U.S. is taking from Pentagon stocks and sending to Ukraine. There have been persistent questions about how much the U.S. can send without affecting the combat readiness of American forces or their ability to train.

The U.S. has been sending hundreds of thousands of rounds of ammunition to Ukraine to help in its fight against Russia and thousands of weapons, ranging from Javelins and Howitzers to longer range systems such as the High-Mobility Artillery Rocket System (HIMARS.)

For example, a recent package of aid contained 75,000 rounds for the Howitzer.

“We obviously do have a finite supply of those systems and that is exactly why we have put so much emphasis working with our industry partners on trying to increase the production lines for these kinds of systems,” said Wormuth.