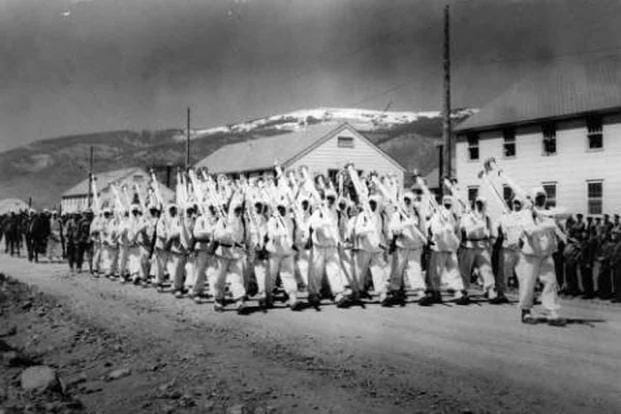 A massive stretch of mountains and valleys, where World War II soldiers from the Army’s 10th Mountain Division trained to snowshoe, ski and rock climb for their fight in the Italian Alps, will become the nation’s newest national monument.

President Joe Biden was traveling to rural Colorado on Wednesday to designate more than 53,000 acres of land as the Camp Hale-Continental Divide National Monument under the Antiquities Act, protecting the land from development, mining and deforestation.

“This monument preserves and protects the mountains and valleys where the U.S. Army’s 10th Mountain Division prepared for their brave service that ultimately brought WWII to a close,” the White House said in a statement after Biden signed the proclamation. “Their skills, grit and endurance were instrumental in protecting democracy and fighting the spread of fascism.”

Read Next: No More Tape Test, But Only for Soldiers That Crush the Fitness Test

The designation of Camp Hale as a national monument has also been heartwarming for some of the remaining veterans who trained there.

World War II veteran Francis Lovett, who trained at Camp Hale, told Bennet’s office in a video interview that having a place so important to his life protected from development is invaluable to him.

“The experience with the outdoors was, for me, one of the most gorgeous times of my life … that’s one of the reasons I’m so interested in having this declared a national monument,” Lovett said in the interview. “It’s so easy to tear things down. And you can’t put them back.”

Training at Camp Hale, located about 100 miles southwest of Denver, was rigorous, and conditions for the 15,000 troops stationed in the frigid Colorado cold were often miserable. This led to the nickname “Camp Hell,” according to the National Parks Conservation Association.

“I got off the train and looked around and thought, ‘What have I done? There were all these snow-covered mountains,'” Bruce Campbell, a World War II veteran who also trained at Camp Hale, told CBS Denver. “We would go on little hikes like 20 miles in eight hours that was in the dry land or even with skis.”

Additionally, the mountains of Camp Hale were used by the CIA to covertly train Tibetan soldiers from 1959 to 1965, according to a fact sheet from the Army Corps of Engineers. The site was decommissioned and later returned to the U.S. Forest Service in 1966.

Since then, there have been major efforts to clear the area of unexploded mines and military ordnance throughout the area. Two widespread sweeps have happened, one in 2001 and the other in 2003, which led to the removal of nearly 30 live items that were destroyed by Fort Carson Explosive Ordnance Disposal personnel, the Army Corps of Engineers said in a 2014 press release.

Biden’s designation of Camp Hale as a national monument is also a political move, offering Bennet, a fellow Democrat, a boost in his competitive Senate reelection bid where he faces Republican nominee Joe O’Dea in the upcoming midterm elections.

In a statement Wednesday, O’Dea called Camp Hale “an amazing place” but slammed the designation, saying, “Biden and Bennet are moving the country badly in the wrong direction, and no amount of photo-ops in a place we all love will change this fact: Accountability from the voters is coming soon.”

Republican members of Colorado’s delegation in Washington were also against Biden using the Antiquities Act — an authority passed in 1906 by Theodore Roosevelt that allows the president to protect federal lands by making them monuments — claiming it was sidestepping congressional approval.

contributions to World War II, we don’t support the efforts of extremist environmentalists who

literally does not exist — to prohibit timber harvesting and mining on nearly 30,000 acres of land,” a Sept. 23 letter signed by members of Colorado’s GOP congressional delegation read.

The designation of Camp Hale as a national monument also comes as the state braces to potentially lose the U.S. Space Command’s headquarters in Colorado Springs to Huntsville, Alabama. Former President Donald Trump announced Alabama’s Redstone Arsenal as the preferred location for the command in the waning days of his administration.

Bennet and Hickenlooper wrote a letter to Air Force Secretary Frank Kendall on Sept. 27, urging him to reconsider Colorado Springs “prior to the issuance of a final decision.”

Additionally, the Supreme Court’s ruling in Dobbs v. Jackson Women’s Health Organization this year — which ultimately left the right to an abortion up to the states — raised a red flag for Bennet, who believes moving U.S. Space Command from Colorado to Alabama will hurt troops’ quality of life, as well as harm the military’s retention efforts.

“I’m deeply concerned about how the Dobbs decision and state abortion bans will affect Space Command’s workforce and readiness if the command leaves Colorado,” Bennet told Military.com in an emailed statement.

Related: Could Access to Abortion Services Change Where the Military Stations Troops?