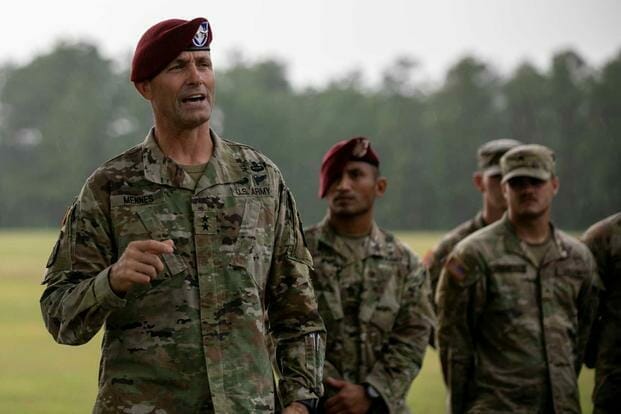 Local leaders at Fort Bragg, North Carolina say that for years they weren’t equipped to keep track of barracks rooms long known to be plagued by mold that were condemned earlier this month.

The sudden decision to demolish a handful of buildings in the Smoke Bomb Hill area of the base, coming only after the mold situation drew attention from the Army secretary and lawmakers, has forced the evacuation of 1,200 soldiers.

Garrison leaders at the famed installation, home of the 82nd Airborne Division and Special Forces, described at a press conference Friday that for decades the mold issues had been handled ad hoc through cleaning or evacuating individual rooms. They said that they were aware of issues but didn’t have any sense as to the systemic nature of the problem — mostly faulting outdated tracking software that’s set to be replaced within the next two years.

Read Next: Cost Estimate for Global War on Terrorism Memorial Balloons to $100 Million

“We’ve been very aware of a lot of these rooms … the investment in these buildings had become untenable, right where it’s been a constant like daily process of maintaining these facilities,” Command Sgt. Maj. Thomas Holland, the top enlisted leader of the XVIII Airborne Corps, told reporters.

Those mold issues have been around for generations of service members. Four veterans who spoke to Military.com said the barracks have been infested with mold, among other problems, since they served in the 1980s. In 2020, roughly 200 soldiers were relocated to new living quarters.

The persistent mold has been linked to mid-20th century air conditioning systems which frequently leak but are too expensive and complicated to effectively maintain or replace.

“We’ve tried to do what we can with what we’ve got,” Maj. Gen. Brian Mennes, deputy commanding general of the XVIII Airborne Corps, said at Friday’s press conference.

Local officials decided to finally remove some 1,200 soldiers from those buildings earlier this month after a July visit from Sgt. Maj. of the Army Michael Grinston who was traveling with a Military.com reporter. So far, roughly 120 have been relocated, mostly to the noncommissioned officer academy on post. About 400 soldiers will be granted a housing allowance to live outside of base, while the rest are due to be relocated to other locations at Fort Bragg by the end of September.

But that relocation only happened after soldiers raised concerns to Sen. Thom Tillis, R- N.C. in December and a separate complaint to Army Secretary Christine Wormuth in early July ahead of Grinston’s visit. A team from Army Materiel Command, which oversees installations, were dispatched shortly before Grinston’s inspection. By late July, it was decided to remove the soldiers and demolish 12 of those buildings and refurbish another five. That demolition is set for next year.

Bragg officials told reporters there are at least 21 other barracks rooms on post and separate from Smoke Bomb Hill which may have mold issues.

A key problem Army officials said is the software the service currently uses to track mold and other issues at barracks. That software makes it difficult for commanders to separate what are systemic issues versus outlier health and maintenance problems. A new system, developed by the Army Corps of Engineers, is set to take over within the next 18 months.

But even with that new system, barracks issues are not being properly addressed by company-level leaders. In other cases junior soldiers aren’t reporting issues either because of cultural pressure to accept austere conditions or due to fear of raising the alarm to their leadership.

“They might be nervous or fearful about talking with their senior leaders,” Holland said.

Poor living conditions have increasingly become a top issue among senior Army leaders. In 2007, then Army Secretary Francis Harvey resigned after a scandal at Walter Reed Army Medical Center in which patients were living in filthy conditions with rooms infested with mold and rodents. Grinston, the service’s top enlisted leader, has made boosting soldier’s living standards a top priority of his tenure, constantly touring barracks and advocating for improvements behind the scenes. The military plans to spend roughly $13 billion on barracks construction and renovation over the next five years, according to a spokesperson from Army Materiel Command.

Health agencies agree that exposure to mold can lead to a variety of health effects that range from mild symptoms to respiratory issues. For people allergic to mold, the effects can include fever-type symptoms as well as red eyes and skin rashes. One extensive study conducted in 2004 found that there was some evidence that living in moldy areas could lead to the development of asthma in people who did not previously have the condition.

Mold is also not an issue confined solely to Ft. Bragg or even Army installations. The issue has persisted for decades and can be found on posts throughout the country. Meanwhile, service members — enlisted and officers — have repeatedly told Congress that living in moldy housing has led to a variety of serious medical conditions for them and their families.

U.S. Army Capt. Samuel Choe testified this spring that, while living in a moldy house at Ft. Gordon, his daughter developed rashes so bad that her skin became “darkened and reptilian.”

“At its worst, my vibrant and exuberant daughter resembles a burn victim,” Choe said in submitted testimony.

One of the biggest changes that the Army plans to make to address the mold issues, aside from shifting to new tracking software, is to place more responsibility for building inspections on civilian contractors. However, introducing contractors into military housing has not always been an effective or cheaper solution. For example, Balfour Beatty, a company that provides housing in 26 states to 150,000 military residents, recently pled guilty to not only falsifying maintenance records for some of the houses it manages for the military but residents have repeatedly reported concerns over issues like mold and asbestos.

In response to those privatized housing issues, the Defense Department unveiled a tenant bill of rights in 2021 that was intended to give more power to service members who are dealing with contractors. Meanwhile, in January, 2022, the Navy and Marine Corps announced that they hired another contractor to inspect all the homes overseen by private companies. The Army began a similar review last year.