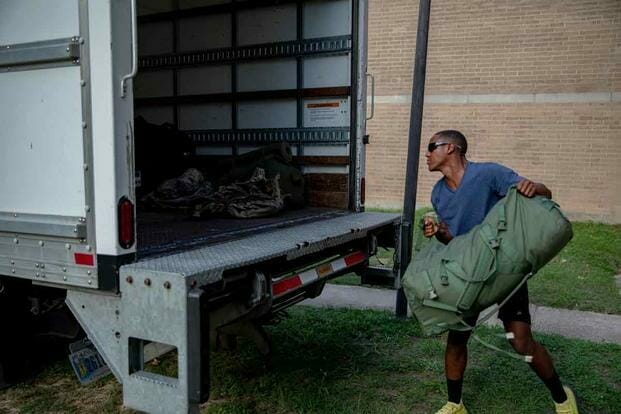 Fort Bragg, North Carolina, has finished relocating 1,189 soldiers from half-century-old buildings that have been infested with mold for years, the service announced late Friday.

The move took nearly two months longer than anticipated, and roughly half of the soldiers moved were granted a housing allowance to live off base, something that is usually reserved for married troops. The evacuation of the moldy barracks was a messy and largely unprecedented move by garrison planners, who had to find room for so many soldiers quickly without disrupting Army operations.

The relocation took place only after the rough living conditions became a point of focus for senior service leaders and garnered media attention. The moves will likely impact base operations for years, with soldiers scattered across Fort Bragg instead of in centralized locations with their units, while roughly 570 soldiers who moved off base will add to car traffic.

It’s unclear what impact those extra troops renting will have on the real estate market in Fayetteville, the town surrounding the base, which is already experiencing a stretched affordable housing market.

“I would like to commend all leaders but especially our senior NCOs’ efforts, which enabled us to accomplish this monumental effort in short order. It was not easy, but we wanted to ensure we did this right in order to best care of our Soldiers,” Maj. Gen. Brian Mennes, the XVIII Airborne Corps and Fort Bragg deputy commanding general, said in a press release. “We understood that all residential moves are significant to the soldier so our guiding principle was to take care of our people throughout this process and not cause undue hardship due to the move.”

Military installations rarely have excess barracks and finding spare rooms was a significant issue for garrison planners. When the decision was made to find new homes for the soldiers, an internal count of beds available on base showed about 3,000, but that number fell to 700 when planners started to confirm availability.

That difficulty finding space is likely to prevent moving so many soldiers out of moldy barracks from becoming standard practice in the force, given the lack of extra space at most bases, though some officials from other installations have reached out to Fort Bragg about the logistics behind the move. Many barracks in the Army’s inventory, particularly in the South, suffer from mold issues, some potentially even worse than Fort Bragg. A Military.com investigation in September found the barracks at Fort Stewart, Georgia, are also in disarray, with the walls of some buildings effectively painted with mold.

Command Sgt. Maj. Quentin Fenderson, the 3rd Infantry Division’s top enlisted leader, told Military.com in a September interview that he did not see the need to remove his soldiers from those buildings.

After leadership was made aware of Military.com’s investigation on the conditions at Fort Stewart, the garrison held a mandatory class to teach noncommissioned officers how to identify and clean mold. After the story was published, the Army initiated a service-wide inspection of all of its facilities, set to be complete by Nov. 18.

The issues at Bragg and Stewart are partly attributable to the way they were constructed in the 1970s, with poor ventilation and outdated air conditioning that is prone to leaking and expensive and complicated to repair, service leaders have said. Soldiers are also not trained to properly mitigate or treat mold issues, though they are routinely expected to do so.

The surge of attention on mold issues can be traced back to July, when a senior noncommissioned officer raised concerns to Army Secretary Christine Wormuth on the mold infestations at Smoke Bomb Hill barracks on Fort Bragg. That complaint followed a smaller relocation effort at the base in 2020, but the mold issues go back decades, according to multiple veterans interviewed by Military.com, which was first to detail the scale of the poor living conditions.

After the complaint to Wormuth, the barracks were inspected by Gen. Edward Daly, head of Army Materiel Command, and later Sergeant Major of the Army Michael Grinston. Leaders at Fort Bragg, home of the famed 82nd Airborne Division and Special Forces, faulted outdated tracking software and told the press in August that it was difficult to see the scope of the mold issues on post.

Both Wormuth and Grinston have made quality-of-life issues one of the top priorities of their tenure, but major shifts have been halted by federal bureaucracy. The service has secured $10 billion from Congress to be spent on barracks construction and renovation over the next decade. Twelve Smoke Bomb Hill barracks are set to be demolished next year, roughly five years ahead of schedule. But a $115 million project for new living quarters at Fort Bragg and renovations of five others could take the rest of the decade to finish.

At Fort Stewart, new barracks projects won’t be completed until 2035.