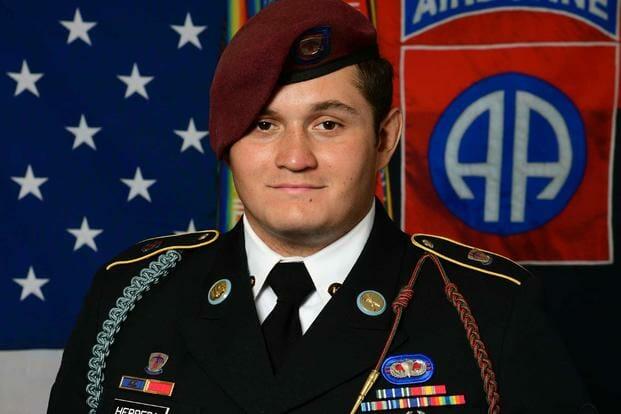 The Army on Friday identified a Fort Bragg soldier who was killed in a vehicle incident that injured three others and echoed an earlier deadly crash just days before in Washington state.

Spc. Luis Herrera, 23, a paratrooper in the 82nd Airborne Division of the Army’s XVIII Airborne Corps, died during what the Army described as routine training at the North Carolina base. Herrera, a native of the state, was married, according to a service press release.

The three injured soldiers involved in the incident went to the base’s Womack Army Medical Center, where one was treated and the other two were admitted for treatment and observation, the press release added. The Army withheld the names due to privacy guidelines.

“Spc. Herrera was an exceptional Paratrooper and an engaged friend to all those who knew him. Luis was a Soldier’s Soldier who always led by example and never missed a chance to leave a positive impact on those around him,” Col. Theodore Kleisner, commander of 1st Brigade Combat Team, 82nd Airborne Division, said in a released statement.

“Big Lou’s presence was a gift to us all, and his radiant smile brought warmth to all who knew him,” said Capt. Daigoroh Abreu, his company commander. The 2-501st Parachute Infantry Regiment will host a memorial for Herrera in the coming weeks, according to the press statement.

The death and injuries at Fort Bragg are under investigation, and appear similar to another incident this week. Only two days earlier, at Yakima Training Center in Washington, another soldier was killed and two others were injured.

Back in January, two Marines lost their lives in Jacksonville, North Carolina, when their tactical vehicle rolled over.

The incidents speak to the wider problem of non-combat military vehicle mishaps being a leading cause of death among troops.

This trend has continued following a Government Accountability Office report from July 2021, which found 123 service members died in non-combat related accidents between fiscal years 2010 and 2019.

The report identified driver inattentiveness, lapses in supervision, and a lack of training as among the most common causes of these types of accidents. It recommended that the Army and Marine Corps adopt new best practices for tactical vehicle safety.

Even while the total number of fatal ground vehicle incidents dropped in fiscal 2021, according to the Army Combat Readiness Center, ending future ground vehicle mishaps for on-duty service members continues to be of serious concern to lawmakers.

Last year, both Maryland senators proposed legislation to establish a pilot program that would authorize data recorders to be installed in tactical vehicles for greater transparency and accountability.

Congress further sought to remedy the situation by including a provision in its annual defense bill, which passed in December, to give the Army and Marine Corps until this June to provide a plan to implement recommendations from the 2021 GAO report.