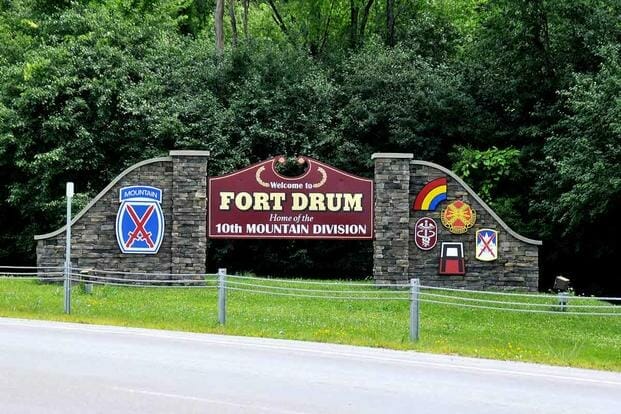 FORT DRUM — Fort Drum could be selected for a new military installation that could add another 3,000 soldiers and dozens more civilian jobs.

Fort Drum is competing for the Army’s new Multi-Domain Task Force — or MDTF, a strategy to deal with the national security threat from China and Russia. Advocate Drum is organizing a letter-writing campaign in support of Fort Drum getting the MDTF.

David J. Zembiec, Advocate Drum’s chairman and CEO of Jefferson County Economic Development, said the goal is to get local elected officials, community groups, area chambers of commerce and economic development leaders to send letters to the Army in support of Fort Drum.

The Army will be selecting two new MDTF installations, he said. Three have already been selected.

Advocate Drum officials have put together a template of the letter that will be used in the local campaign.

They want “as many as we can get,” Mr. Zembiec said.

Fort Drum is among 13 military installations competing for the MDTFs, Mr. Zembiec said.

He thinks Drum has a “fairly good” shot at being selected.

Local officials heard about the possibility of landing the MDTF around the Fourth of July holiday and met last week to discuss how to respond.

“Two MDTF stationing alternatives are being considered by the Army,” according to the Advocate Drum letter.

“The full MDTF investment will mean millions in additional infrastructure at Fort Drum, along with 3,000 additional soldiers, and dozens of additional civilian positions. The base MDTF would mean adding up to 400 soldiers and civilians, with a small investment.

“The investment will also enhance the long-term sustainability of Fort Drum, ensuring that the north country remains the best place on Earth to house and train soldiers to ensure the Army retains its position as the globally dominant land power.”

Advocate Drum would like to send a letters in a package to the Army, but individual groups can forward their own letters.

If they do that, Advocate Drum wants a copy of the letter, he said.

Advocate Drum wants the letters by July 19. The Army has a July 22 deadline.

Congress has expressed concern about the threat to U.S. national security posed by Russia and China.

The Army has put together a strategy to deal with the threat through MDTFs, according to the Congressional Service Report.

The Army contends in order to address the Russia and China threat, it must be able to operate in a multi-domain — air, land, water, space, cyber, information environment — requiring new operational concepts, technologies, weapons, and units, according to the congressional report.

The MDTF is the Army’s self-described “organizational centerpiece” of this effort.

The Army describes the MDTF as “theater-level maneuver elements designed to synchronize precision effects and precision fires in all domains against adversary anti-access/area denial (A2/AD) networks in all domains, enabling joint forces to execute their operational plan (OPLAN)-directed roles.”

Advocate Drum implemented the same kind of local campaign to convince the Department of Defense that Fort Drum should be the preferred location for an East Coast missile defense site, although DoD has yet to make a determination if the project will proceed.

Former Mayor Joseph M. Butler, Civilian Aide to the Secretary of the Army, said that the new MDTF soldiers would be “separate and distinct with special capabilities.”

They would be housed and trained at Fort Drum, but their deployments would come from higher up in the army.

© Copyright 2022 Watertown Daily Times, N.Y.. All rights reserved. This material may not be published, broadcast, rewritten or redistributed.