Get Ready for Fort Liberty: The Pentagon Begins Changing Confederate Base Names 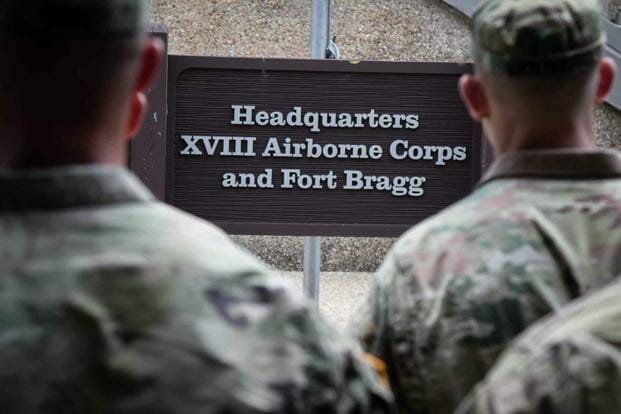 The Pentagon has started the process of renaming Fort Bragg and other bases, as well as ships and hundreds of signs and roads, as it plans to scrub ties to the Confederacy from all installations by the start of 2024.

A large Confederate memorial at Arlington National Cemetery in Virginia was already being disassembled this week, according to the Pentagon. The 108-year-old monument depicts Southerners gallantly marching off to the Civil War — and their Black slaves holding a white soldier’s baby and following troops obediently.

William LaPlante, the undersecretary of defense for acquisition and sustainment, directed all Department of Defense organizations to implement this week the recommendations handed down by the Naming Commission, an independent panel created by Congress and charged with reviewing and replacing the names, according to a press release.

It’s a heavy undertaking that includes new names for nine Army bases — Bragg will become Fort Liberty — two Navy ships and upward of 1,000 other items located on America’s military installations. But Brig. Gen. Pat Ryder, the Pentagon’s press secretary, told reporters Wednesday he was optimistic it could all be done within the year.

“I think we are confident, you know, each of the services has clear instructions in terms of what it is that they need to focus on, and where the secretary is confident that the services are and will continue to take that seriously,” he said.

Ryder did not have an updated figure on what it would cost to take on all of the recommendations from the Naming Commission. The latest estimate from the group, released this past September, was a total of $62.5 million.

Katherine Kuzminski, a senior fellow at the Center for a New American Security think tank who researches military culture, told Military.com on Friday that the DoD has dealt with renaming operations in the past.

In 2018, then-Defense Secretary Jim Mattis announced that the U.S. Pacific Command would become the U.S. Indo-Pacific Command, a shift that required changes ranging from signs to stationery.

Kuzminski said that was accomplished in a relatively short period of time. She added that senior leaders in the military can also start referring to those Army bases by their new names right now to help make them commonplace.

“You do have to think about all of the details such as who owns what signage or when exits on interstates will be changed,” Kuzminski said. “But we can start referring to these installations like Fort Liberty by these new names and it can get at what the Naming Commission was doing, which was changing the culture.”

Kuzminski said it’s possible cost estimates could go up as the Pentagon starts to unravel how involved the renaming and replacing process is.

Department of Defense officials began to reckon with the military’s long history of honoring namesakes tied to the rebel army that fought in the Civil War following George Floyd’s murder at the hands of police, which subsequently sparked nationwide anti-racism protests.

The Naming Commission was established in the 2021 National Defense Authorization Act and began submitting its first report cataloging those Confederate-linked names on military bases in May 2022. Defense Secretary Lloyd Austin accepted the commission’s recommendations this last September.

The group identified nine Army bases, including Fort Bragg, North Carolina, and Fort Benning, Georgia, which are both named for Confederate officers.

They recommended Benning be renamed Fort Moore, after Lt. Gen. Hal Moore, who led men during the Vietnam War, and his wife Julia. The cost of renaming all of those bases will come to around $21 million, by the Naming Commission’s estimates.

Additionally, the Navy identified the USS Chancellorsville, named after a Civil War battle with a Confederate victory, and the USNS Maury, named after Matthew Fontaine Maury, who left the Navy to sail for the Confederacy, according to the Pentagon. The commission did not provide new name recommendations for those vessels.

The commission also identified Confederate officers recognized on campus at West Point and the U.S. Naval Academy, which will cost an estimated $450,000 to replace.

The largest amount of assets would be various roads, signs, buildings and street names throughout the Pentagon’s portfolio, which would account for nearly $41 million of the cost.