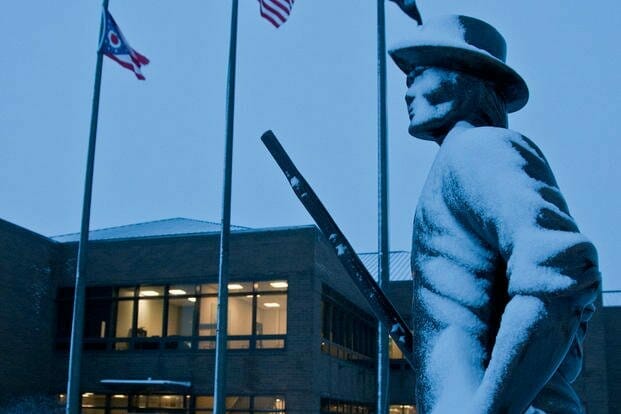 An Ohio National Guardsman with a history of sharing anti-Semitic and sexist views via social media was arrested on charges related to making and selling so-called “ghost guns.”

Prosecutors say Thomas Develin planned to make the guns, which are meant to be untraceable and are built using 3D printers, to sell for profit. He also allegedly possessed conversion kits to retrofit semi-automatic rifles and pistols into fully automatic weapons. He faces five federal charges, including possession of a machine gun, selling firearms without a license and making firearms in violation of federal law.

Develin, a corporal, is assigned to the Ohio Army National Guard’s 2nd Battalion, 174th Air Defense Regiment and serves as an air defense battle management operator. His security clearance was suspended, and he is prohibited from participating in any training with his unit, a Guard spokesperson told Military.com.

Read Next: How Do You Create a Guardian? A Look Inside Space Force’s First Specialized Basic Training

However, the spokesman said he will not be disciplined or separated from the military until the criminal case is concluded. That decision is not required by any military regulation, as service members are frequently booted from the Guard without civilian due process, including for the use of marijuana, which is forbidden military-wide, even in states where recreational use is permitted.

Ghost guns are becoming prevalent in crimes across the U.S., with 20,000 of the weapons confiscated by police in criminal investigations in 2021, a tenfold increase from 2016, according to the White House.

Because ghost guns lack a serial number that are found on all legally manufactured weapons, they are difficult for law enforcement to track. As 3D printing technology has advanced, hobbyists have been increasingly making parts or even whole weapons using plans downloaded off the internet.

Yet Develin’s plans and ideas allegedly extended far beyond making money selling untraceable weapons. According to an affidavit filed by investigators and provided to Military.com by the Program on Extremism at George Washington University, Develin regularly talked about committing large-scale violence with targets ranging from military installations to Jewish synagogues.

As a member of the National Guard, Develin had access to any military base in the U.S. In December, he posted a Discord message saying, “Ight, time to turn wright pat airbase into Fort Hood in 2009.”

Discord is effectively a message board with mostly private chat rooms. It’s mostly used in the video game community.

Wright-Patterson Air Force Base is a major military installation near Dayton, Ohio. Develin was seemingly referring to a mass shooting at Fort Hood in 2009, in which an active duty officer killed 13 people and injured more than 30 in the deadliest mass shooting on an American military base.

The investigation into Develin started in March when authorities obtained Discord chats messages dating to October 2021. That Discord chat was largely populated by members of the Ohio National Guard, according to court documents. Authorities say the Guard provided messages from Develin in that chat, which showed “a large quantity of antisemitic, white nationalist, racist and misogynistic content.”

It is unclear if all the threats he made, including the one against Wright-Patterson Air Base, were made on the same chat he shared with other Ohio Guardsmen.

According to a Telegram conversation, included in court documents, on March 28, 2022, between Develin and an unidentified person who appears to be a fellow member of the guard, the branch had already taken steps to deal with the members of this group.

“FYI all the full-timers have a BOLO for us statewide at all armories,” the unidentified person wrote before listing an unknown number of redacted names. A BOLO is a law enforcement term for “be on the lookout.” .

“So this is a military investigation,” Develin wrote before adding that “CID [Criminal Investigative Division] isn’t a joke.”

“Now I need to know if I’m walking into an arrest the moment I set foot on (sic)bliss,” Develin said in the chat. The other person replied: “I have no idea.”

Develin was initially arrested in March when he made threats against the Columbus Torah Academy, a private K-12 Jewish school. One of those threats included a Discord post of him holding a gun and caption saying, “I’m at a Jewish school and about to make it everyone’s problem.” He was quickly released on bond and placed on house arrest.

The affidavit describes the incident as just one of many. Throughout 2021 and into 2022, Develin worked as a security guard and the CEO of a company that mostly worked for religious institutions. Investigators found numerous messages that he made while on location at synagogues or Jewish schools that were paired with hateful messages like “The holocaust didn’t happen,” and “If anything I’ll scream 6 million wasn’t enough.”

In another video, made in November 2021, Develin could be seen sniffing the top of an AK-47 rifle while saying, “This one smells like dead Jews.”

The court filing also notes that Develin was a follower of the shooter behind the 2019 terrorist attack on two mosques in Christchurch, New Zealand, that killed 51 people. The guardsman made a video that showed off how he decorated an AR-15 magazine in a style similar to the Christchurch shooter. The affidavit also explained that investigators discovered after seizing Develin’s laptop that he had made at least 87 web searches related to the attack.

Several of the messages cited in the affidavit also featured Develin advocating for the rape of women. In one post, Develin wrote that he had “become so radicalized against women that I’ve forgotten how to act rationally around them.”

One image he shared in the Discord chatroom had the words, “Rome wasn’t built in a day — and neither was my sexual assault record” overtop an image from the TV show “Mad Men,” an image that has become a meme on social media networks although it was unclear if Develin made the version he posted.

Develin’s first court appearance on the new federal charges will be in District Court for the Southern District of Ohio on Wednesday afternoon, according to the Department of Justice.

Related: 4 Veterans and a National Guard Cadet Among Members of White Supremacist Group Arrested in Idaho