Here’s How Troops Survive ‘Fire Phobia Training,’ Which Is Exactly What it Sounds Like 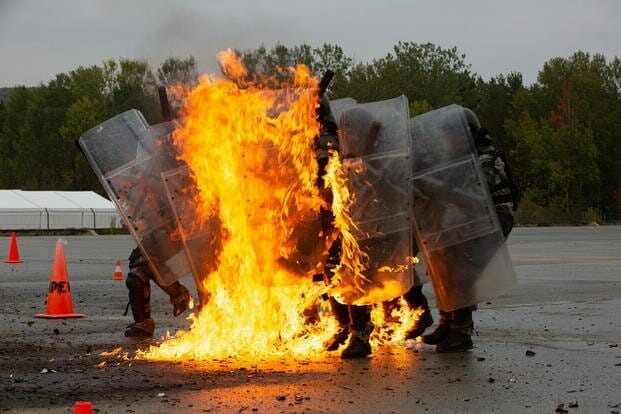 “I didn’t know I was going to get set on fire during deployment,” Spc. Joseph Stammeyer of the Iowa National Guard said. “But it was fun.”

Though rarely in the headlines, a force of more than 600 US troops has been deployed to Kosovo since 1999, when fighting ended in the region following the dissolution of Yugoslavia. The US units are in place mostly as peacekeepers, so the training they get in preparation for the deployments is aimed less at direct action and more at policing, civil unrest and riot control.

Which means that on a fairly regular basis, groups of US and NATO soldiers take their turn getting toasted by local police or NATO allies in a fiery crowd-control drill known as “fire phobia training.”

In the way of most military jargon, the name seems a bit backwards, at least partially implying that the training instills a fear of fire rather than hardening soldiers against it, but either way, Stammeyer and the Iowa Guard’s 113th Cavalry Regiment was one in a line of many US units that faced live Molotov cocktail-style burning liquids throw by NATO trainers. While momentarily engulfed in flames, the soldiers have to first absorb the contact and then react.

Along with full uniforms and facemasks, troops wear various pads and strap-on body armor plates, and they form tight formations behind riot shields.

Still, for at least a second or so, they’re on fire.

“It was hot,” said Elijah Vos, a specialist in the 113th Cav. “It wasn’t as scary as I thought it was going to be. They show you what to do, how to stomp your feet, shake your shield, and plow right through it.”

Though fire phobia training appears nuts, it’s relatively routine for troops headed to Kosovo, where they make up the NATO-led Kosovo Force, or KFOR. Soldiers of the Indiana Guard’s Task Force Nighthawk of the 2-151st Infantry Battalion got their turn to burn at the Army’s Joint Multinational Readiness Center at the Hohenfels Training Area in Germany in early October, along with some North Macedonian soldiers. The Kentucky National Guard’s 1st Battalion, 149th Infantry, went through the training in February. Stammeyer, Vos, and the Iowa Guard unit got their fire phobia training on a deployment in 2021 in a training session captured by a Pentagon news crew.

Speaking to Army film crews, the Iowa troops appeared no worse for wear after the drills.

“I was super excited,” Spc. Andres Torres said. “Not every day you get to have a Molotov cocktail thrown at you.”